Tortoise vs Hare Revisited: A parable for Chicago landlords 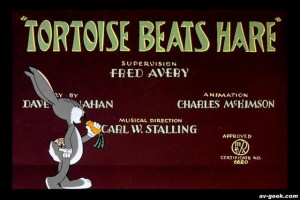 Any other Bugs Bunny fans out there?

We all know the story of the Tortoise and the Hare, right? The two of them race. The hare spends all of his energy at the beginning, and runs out of steam. The tortoise plods along and wins. The well-worn moral is that "slow and steady wins the race."

Now that it's all over, I'd like to tell you a story about how "slow and steady" led to a landlord losing not one but TWO very good tenants.

The weekend of April 21 was very busy for me, with four rental tours. It was the last real weekend before May 1, which is (as many of you know) the busiest moving month in the year in the Chicago apartment market. A few poor souls may be looking next weekend, but for the most part anything not rented by April 23 will sit empty until June 1.

One couple in particular notified me on the 18th that they were getting transferred to Chicago effective May 1. They had a day and a half in Chicago to find an apartment from April 21 to April 22 for themselves, their children, and their dog. They had to leave by 6p on Sunday to drive back to Michigan.

I set them up for a tour of 10 rentals. By the time we'd seen 4, they'd found 3 where they'd be perfectly happy, so we curtailed the search. Two of their local friends were touring with them to make sure I didn't put them in the ghetto - no worries there.

My clients and their local friends agreed - the top choice was a high end condo close to the lake. In fact I think it was pure altruism that kept the local friends from snagging the apartment for themselves! It was owned by the listing agent, so I called him and said my clients would be interested in taking the place immediately, as-is, for $100 under list. (It was in good shape but obviously hadn't been cleaned yet from the prior tenants.) I got his voice mail. It was 12:30pm.

I went to grab a bite to eat with my clients and given that the market is tight we started discussing backup plans. Their second choice was also a high end condo for rent close to the lake. It had one less bathroom, and was a conversion instead of new construction, but was in the same neighborhood, the same price, had better appliances, and had more amenities included. We agreed that if their top choice wouldn't negotiate we would move on and make the same offer - $100 as is for immediate move in - to the second choice apartment.

We parted ways at 1:30pm. I got back to the office at 2pm and left another message with the first choice agent explaining my clients' situation and that they had to have an answer before they left the city at 6pm.

By 3:30pm (3 hours after my initial call), I had also contacted the agent for the 2nd apartment just in case. I had made our offer. He bounced the offer off of his clients and got back to me immediately with an "all clear." He even waived his requirement of using his office's application so that we could use the paperwork I already had on file and get the process started more quickly.

I contacted my clients to let them know we had not heard from agent-landlord #1 yet. This sent us into a discussion about what would happen if this had been a situation with broken plumbing or broken heat, and the landlord didn't respond for 3 hours. It made their second choice apartment suddenly seem a lot more attractive. You guys can guess what happened next. They moved into their former second choice this past Saturday. Their first choice is still sitting on the market, unrented.

At 10:50pm the slowpoke agent-landlord finally returned my call and left me a message as I'd already turned in for the night. "Sure," he said, "turn in an application. Oh, and I also have an identical unit coming up in the same building on the 1st floor for July." If he'd only called back earlier I probably could have rented both of those units. Instead, he's created a bad first impression of himself with four people by doing nothing at all.

Landlords, even though it's your game right now, tenants still don't want to rent from shady, unresponsive lumps. The fast market stats pertain only to the good units that make a great impression. Tenants are judging not only the property but whether or not they can stand to have a year long business relationship with you. Your choice of agent says a lot about your landlording style. Regardless of who you have representing the property, make sure they are providing the same level of service that you would provide yourself. And agent-owners, if someone is showing your listing, keep your phone on, ok?