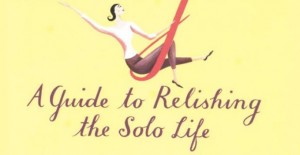 From the cover of "Living Alone and Loving It" by Barbara Feldon. I haven't read the book but I liked looking at the pictures.

Going into the research for today I was pretty much certain that I'd more small units available in the winter than I would larger units. As it turns out, from a supply point of view I was very wrong. However, in terms of demand my anecdotal evidence was proven to be pretty accurate. Single renters drive the off-season rental market in Chicago. It probably doesn't make you feel any better to know that your heartache is serving to line the pocket of a landlord. But if it's any consolation, at least now you know you're not alone, and you can plan accordingly!

The paramount dogma of economic theory is that of supply & demand. If a market is truly balanced you'll see supply and demand rise and fall in sync with each other. My original hypothesis going into this was that the market for smaller units wouldn't see as substantial of a drop-off in the winter as would be seen in the market for larger units. I started by looking at the supply.

Below is a chart showing the number of small (studios & 1 bedroom) apartments that came on the market as compared with the number of larger (2-3 bedroom) apartments on a month by month basis reaching back 3 years. If my hypothesis was correct, the two lines on the following chart would be vastly different in the winter months. You'd see the blue line get much higher than the red line in the winter every year.

Obviously, I was wrong at least on the supply side. The landlords who are listing their properties in the MLS are definitely aware that there's a seasonal slow-down in late autumn. However, if there's more single people than families looking for apartments in the wintertime, the trend hasn't affected the inventory of available apartments. Small or large, the number of units on the market is consistent even if it varies wildly by season.

Note: there are actually a lot more 2-3 bedroom units in the MLS at any given point than there are studios & 1 bedrooms. I've normed the data to make the chart easier to comprehend. My methods are explained in the methodology section below.

So, I was wrong on the supply side. And I'm into the science so I'm OK with being wrong. But it did make me wonder if my anecdotal evidence of seeing more singles looking for apartments would bear out on the larger scale. I went back and did some more digging to figure out the comparative demand for those apartments.

Demand via MLS statistics is a little more difficult to gauge. The best metric I can think of for figuring it out is how long each listing spent on the market. High demand means short market times. So I pulled the average market times per month using the same size breakdown - studios & 1 bedroom apartments for the single folks and 2-3 bedroom apartments for the families & larger groups.

You have to read the next chart a little bit backwards. The lower the line, the higher the demand. In this case, if my hypothesis was correct, we'd see substantially lower market times in the winter for the smaller apartments (the blue line) than we would for the bigger ones (the red line).

... and I was right. Look at the huge gaps between the lines towards the later part of each year. Science or not, I feel much better now.

On average there were 1.61 times more 2-3 bedroom apartments coming on the market in the MLS in a given month than there were studios & 1 bedroom apartments. The standard deviation on that was just 0.17, or 10%, across the entire 3 years of data that I pulled. This means that if you're working with a Realtor to find an apartment at any point in the year, you're between 3.2 and 4.8 times more likely to find a big place to share with a roommate or two than you are looking alone. If you really just want a studio or a 1 bed - especially a high end one - you can certainly still try work with a Realtor but be prepared to make up your mind quickly.

Calculating demand was a lot more labor-intensive. I had to download all of the rented units in 3000 unit chunks, as that's the maximum I can export from the MLS in one shot. I then used Excel's subtotaling functions to get the average market times for all the units rented each month.

Questions? Comments? Fire away! I'll be back Monday with something a little spooky.