Everybody loves a bargain, but not everyone can handle the pace.

So in case you hadn't heard, we're in the best Buyer's Market that's come along for the past generation. Rarely are mortgage rates and home prices so low at the same time. Bankrate.com is currently showing 3.78% on a 30 year fixed mortgage. Just 5 years ago I paid 6.125% on my own loan, and that was with good credit and 40% down.

Residential homebuyers are starting to pick up on what investors have already known for a couple of years. Prices are about as low as they can go. Foreclosures, which list on average at about 60-70% of full market price, are hitting the market at a faster pace now that judicial roadblocks have been cleared up. Investors have been snapping up these cheap properties wherever they can, and then turning around and renting them out to take advantage of the best Landlord's market in a decade. Rumor has it that you can walk out and pick up entire floors worth of lakefront condominiums for under $100k each.

The pace is definitely picking up, but it's having an odd effect. I recently got into a bidding war on a foreclosure in Skokie with a couple of buyer clients. Even 12 months ago this would have been unthinkable. END_OF_DOCUMENT_TOKEN_TO_BE_REPLACED

Hype Dodger: You Do Not Live in Chicago

Any statistics that claim to speak for the entirety of Chicago are full of crap.

Any statistics that look at only the downtown area of Chicago are full of crap.

Any statistics stating that the Chicago real estate market is collectively going up, down, sideways or falling into the lake should be collectively and summarily ignored.

To paraphrase Douglas Adams for a moment, Chicago is big. You just won't believe how vastly, hugely, mind-bogglingly big it is. I mean, you may think it's a long commute to work in your current city, but that's just peanuts to Chicago.

As the wonderful "Manhattan Elsewhere" map shows, most of Manhattan would fit between Armitage and I-55. Chicago has three "sides," 77 community areas, 85 zip codes, and over 200 neighborhoods. Each neighborhood has its own downtown area, cultural identity, school districts, parking demands, peak traffic times, dominant gangs and rent/own ratios.

The rent vs buy scenario immediately surrounding North Park University will be very different from what you'll find right next to the top-rated Edison School for the Gifted just a few blocks away. Distressed properties will appear at higher rates in communities where language barriers made first-time buyers more susceptible to predatory lending practices. Or where dominant cultural traditions left families with single wage-earners more vulnerable to job loss. Or where aging populations forced estate sales in a down market. Areas full of Class B investment properties will not turn into areas full of Class A properties in any foreseeable future.

Besides, you're going to be living in your home for over 5 years, and look at what happened to Wicker Park condos from 1998 to 2002 (pre-bubble) - sales volume increased 2.7x over and the average sale price increased 60%. As a famous fictional local once said, "Life moves pretty fast." You, on the other hand, won't need to move for quite a while if you buy well.

If you were looking to buy property in any small town, suburb or even a smaller city, you'd probably be looking within an area with a population of about 6500 people, and maybe one or two zip codes. It stands to reason, then, that when shopping for property in Chicago that you focus your search and stats on areas of comparable size.

I recently had a conversation with a landlord who was despondent about the length of time it was taking him to rent his condo in West Rogers Park. "I thought this was the peak market!" he said. "Why is it taking so long?" I had to explain to him that yes, rents are up, market times are down, and number of units rented is way up. However, a "peak market" is a very subjective thing.

In West Rogers Park, average market times for rentals have gone from 82 days in 2009 to about 60 days in 2012. Just 2 miles away from my landlord friend in chic Andersonville, the average market time for an apartment has gone from 86 days in 2009 to 26 days in recent months. In both areas the rents have gone up, and in both areas the volume of rented units has more than doubled over the past 3 years. It's indeed a "peak market" in both places, but the term means something very different depending on whether you're north or south of Devon Avenue.

Looking at the buyers' side, let's tell the story of 3 condo buildings within 2 blocks of each other in Edgewater, in a buyer's market.

6166 Sheridan is a Class B high rise with 154 units. 7 of them, all 1 beds and 2 beds, have sold for an average price of $46,857 in the past year. The top dollar achieved was about $55k. Prices in the past 3 months have been the lowest of the year. Almost every sale was a short or a foreclosure.

Across the street, against the lake, is 6171 Sheridan, also a Class B high rise, with 312 units. 9 of these units, (studios, 1 beds and 2 beds) have sold in the past year. The average was $76,827 and the top dollar was about $126k. Prices have stayed pretty consistent throughout the entire year, but again, nearly everything was a short or a foreclosure.

Two blocks inland stands the new building at 1134 Granville, which I would also define as a Class B property due to its lack of amenities. It is also technically a high rise and of comparable density to 6166 Sheridan at 160 units, all 2 beds. 21 of these have sold in the past 12 months, at an average price of $185261. The lowest price in these units, all selling at full market prices, was $150k.

The President and the Professors

Certain sections of Chicago have weathered the downturn quite well. I frequently need to explain to my renter clients that the high end condos for rent aren't to be found in the immediate vicinity of the Ravenswood Metra station, as the station has kept sale prices high enough that the owners have still been able to sell at decent prices instead of turning into landlords.

The takeaway from today should be a small amount of awareness of how generic stats about Chicago and the real estate industry in general can be incredibly misleading. Between the news and the real estate media wonks, the public is besieged by marketers with known conflicts of interest trying to alternately push them towards panic or purchases by clever use of statistics. While stats have their place, extremely fine-grain knowledge of the city's neighborhoods is required before they can be successfully interpreted.

So, please: do not base your decision to buy a home on the citywide stats, and certainly don't base them on any national stats. Even my divisions of Downtown, Name Brand Neighborhoods and Generic Neighborhoods are meant only as surface benchmarks. After all, you're not buying in Chicago. You're buying in a very small section of Chicago with a cultural identity all its own. Please treat your new community with the respect it deserves.

Oh, and by the way, if you want me to get you more fine-grain stats for any piece I write, feel free to request them in the comments! 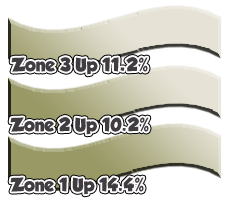 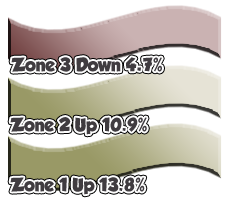 Stats reflect pricing and activity for 2 bedroom apartments rented by Realtors and listed in ConnectMLS.