Tales from the Field

Happy Halloween week, dear Piggies! As I will be up to my eyeballs in community organizing on Wednesday, today is our very special Halloween installment of StrawStickStone, featuring horror stories either from my personal experience or related to me first-hand from coworkers.

These are all safe for work, but not necessarily all safe for lunchtime. Names have been changed to protect the innocent.

Gladys was 84 years old and in ill health. In the most recent days she had gone from able-bodied to hospitalized to hospice. Her daughter came in from out of state to handle her mother's affairs. She obtained Gladys' keys and written power of attorney to pick up some items from the apartment. We sent a staffer along with her. 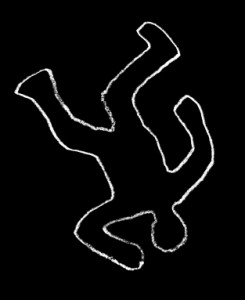 They tried the front door and it would not open. So they went around back to try and gain access through the kitchen. The kitchen door opened only wide enough to allow them access one at a time. Beyond, they found accumulated the past 30 years of Gladys' life in stacks and piles. No surface was spared. The kitchen surfaces were loaded from counter-top to ceiling with canned goods, some dating back several decades with faded labels. Papers were stacked three to four layers deep against the walls, on chairs, table-tops and any other flat surface.

The bathroom showed that she'd been taking sponge baths for some time, as the tub was piled high with dusty old clothing and yellowed newspapers.

Even in the bedroom there was no flat surface remaining. It was April and the steam heated apartment was frigid, as every radiator was surrounded by piles of debris.

Where did she sleep? They wondered.

They finally spotted the only possible option. Gladys' ground floor apartment had two steps descending from the entry level down to foundation level. Everywhere else in the apartment only allowed small walkways for a human to pass through. On the stairs was a larger opening, maybe two and a half feet wide, of empty space surrounded by paperback books.

Surrounded by her hoarded items, Gladys had been sleeping on the stairs.

She died within the month. The daughter, pulled away from her job and her home downstate, spent the next three months removing all of the debris from the apartment to six separate storage lockers.

The apartment itself had been unattended for decades. The staff needed another two months to get it fully updated into a condition where any modern tenant would see fit to rent it. The 1970's era refrigerator had failed, likely leading to Gladys' final illness, but she had been too embarrassed to report the problem lest someone see the condition of her apartment.

Landlords, even when you get to the point where you have hundreds or thousands of apartments in your inventory, always remember to visit each apartment and take photos of its condition at least once a year.

One of my employers had picked up a rental property by the river - an overcrowded, hulking mess of a courtyard building with in some cases up to six adults sharing a tiny studio apartment. In addition to the massive human population, it also came with a complete set of the big six pests: rodents, ants, roaches, fleas, pigeons and gangbangers. (This was before the bedbug resurgence of 2009.)

It took the staff nearly three years to bring the many problems under control. First went the pigeons due to some creative netting and spiking of all exterior flat surfaces. Sealing the entire foundation slowly brought the roaches under control, along with massive applications of Maxthon and switching to a "no dogs" policy. Tenants in overcrowded apartments were slowly phased out, their apartments renovated and rerented. By the fourth year, the apartments were starting to look pretty good but the prices still hadn't completely rebounded due to the building's longstanding history of trouble.

It was July. A pot-smoking student had just been evicted from his 2nd floor studio for non-payment. As often happens in these situations, the mice that had been living off of his sloppy housekeeping fled to the next nearest source of food - the upstairs neighbor and her cats' food bowl. By this point we had established a zero tolerance policy for rodents at that location, so when the unhappy new host to the mice called in to request an exterminator she got more poison bait boxes than she could really handle. She also filed to break her lease at the same time, with good reason.

Now, I know that this next bit will not say nice things about my morals, but I will offer this apology: I was representing the landlord in this situation, and an agent owes obedience to their client. In property management, if the boss says you're supposed to show an apartment, you show it, regardless of condition. So off I went to show this girl's apartment. I had warned her beforehand, but the morning of the showing I got a text from her. "Careful in the kitchen," it said, "had to run out early."

It was an L-shaped studio, so I couldn't see into the kitchen until we were on the verge of entering it. It was a very pretty kitchen. Maple cabinets, dishwasher, granite countertops. And a nice big fat dead mouse in the middle of the hardwood kitchen floor. Knowing that there might be some surprises lurking about I had been walking ahead of the prospie and tried to position myself so that she wouldn't see the mouse. While continuing my spiel, I tried to nudge it up against the wall with my foot.

It didn't work so well. 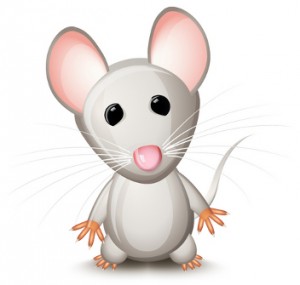 It wasn't nearly this cute, I promise.

For the next 5 minutes, I stood very very still from the waist down and made a valiant effort to hide the fact that I'd just missed my target and now had a mouse corpse stuck to the bottom of my shoe.

It was to my amazement and probably yours as well that the prospie decided on the spot that she wanted to complete an application to rent the apartment. I set her up with a blank application and made an excuse that I needed to check something on the back porch. One trip outside and some frantic stomping about later, I was down one mouse and up one renter.

Moral of the story? Before renting an apartment always take a quick look at the agent's feet, and remember that while Realtors are bound to disclose any physical defects in the property, leasing agents are not always bound by or trained in to the same code of ethics.

It was a Thursday evening in November. Cold and rainy. I was meeting a prospective renter at a building close to Wrigley Field to show a 2nd floor vacant 1 bedroom. It was about 7pm and I'd been on the job for over 10 hours.

The apartment had been empty for several months, as the prior tenant had left it in poor condition. Our workers had cleaned it out and left it empty. Even so it had been nearly three weeks since I'd had a request to show it. The landlord had set a very high price for a small apartment, and it showed in the low demand. 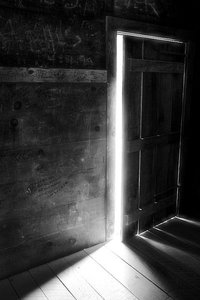 When I opened the bedroom door and turned the lights on things started to get creepy. Against the wall was a sleeping bag. Next to it was a half-empty bottle of whiskey, a full pop bottle of spent cigarettes, and the DVD case for an X-rated movie. The apartment had acquired a squatter. Fortunately the prospie was more amused than frightened, so we moved on to check out the kitchen.

We had been in the kitchen for maybe four minutes when I realized that the back door was cracked slightly open. I realized that gate downstairs was auto-locking. The squatter, if he had left the apartment, was still on the grounds. In one of the more frightening moments of my life, I opened the back door long enough to hook the screen door shut, then closed and locked the back door. We left the apartment pretty much immediately after, pausing only to take photos of the debris in the bedroom and lock the front door. I felt kind of bad locking the guy out in the cold, but I also spent a few minutes after I'd left the showing sitting in my car and shaking.

It took the staff about three weeks to finally get the squatter removed from the property on a permanent basis. They had to invoke the police to cart him off to a more secure place of residence before he got the picture.

I had a showing at a top floor apartment that was still under construction. The workers had been in there for the past week or so, ripping out the kitchen.

The project foreman informed me that the key was on top of the doorframe. I am too short to reach the top of the door frame, but my prospie was tall enough to get it for me.

The workers had locked all three locksets instead of just the one that could be opened with the single key. I ran downstairs, ran around, tried the back door... nope. Called the foreman. He came over (at 9pm!) to give me the back door key. Finally got into the apartment. It was half an hour after the showing was supposed to start. My prospie was obscenely patient.

The apartment was a shambles, of course, as construction sites are wont to be. I was drenched from running around in the rain, out of breath from doing 3 flights of stairs about six times, and totally worn out as it was the end of an 8 hour string of showings without lunch. I did as thorough a tour as I could, considering it was a 500 sq ft 1 bed. Living room, living room closet, kitchen, bedroom, bedroom closet, kitten.

"Meow?" I say. "I'm hungry and scared and I've been trapped in this closet for days and did I mention that I'm hungry?" screams the small black kitten, in kitten of course. 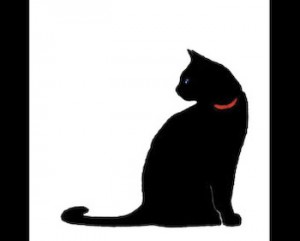 I had run past the signs in the lobby multiple times. Lost black cat, red collar with bell, answers to Arlo. Reward offered. In front of me was a black cat, red collar with bell, not answering to anything as it was screaming its head off out of hunger and fright. With half a bar of battery left on the cell phone I asked the prospie to please hold for a few minutes more, and scrambled back downstairs to call the tenant from the sign. Voicemail. I started back up stairs and notice shoes outside the door of the tenant's apartment. I knocked.

A groggy voice answered. I reply, "It's (my name) from (my company). I found your cat. Bring a towel, he's really scared."

The very happy tenant scampered upstairs with me, collected Arlo and took him back for food. He had been missing since the weekend, so at least four days. He had entered the empty apartment when the door was unlocked, and somehow got shut in the closet. The workers wouldn't have heard him meowing over the radio and the construction noise.

By this point the prospie had checked out the bathroom on their own, asked me for an application, and we ended the showing. I had to have the him pause while I locked up so that we could restore the keys to the top of the doorframe.

So there you have it, folks. Three creepy stories, and one black cat who got very lucky indeed.