When I started this adventure I based my concept of "a fair court system" on an ideal of 50% of cases won by the plaintiff (the landlord) and 50% won by the defendant (the tenant). Even something between 48-52% would have been sufficient. The results I got from the Cook County Eviction stats over the past 8 years indicated that 62.8% of eviction cases were won by the landlord. If I compared this to my idea of a perfectly fair system it clearly indicated a bias, and not the "anti-landlord" bias purported to exist by many Chicago landlords.

The world is not perfect. Neither is the justice system. I started wondering if my ideal 50/50 split of verdicts was even attainable outside of a courthouse run by androids and angels. What if the court system is structured so that 62.8% is as close as you can get to a fair trial in the US? I started digging to find out the verdict balance in some other types of cases. 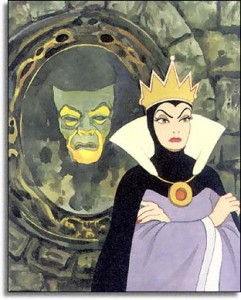 Could Cook County Eviction court be the fairest one of all?

In the process I discovered several excellent sources for court data. The Illinois Supreme Court has annual reports online going back over a decade. The US Bureau of Judicial Statistics may be my new favorite site, but it's up against the Sourcebook of Criminal Justice Statistics at the University of Albany. Of course, no online source can compare with having a law librarian for a friend - my friend Taylor has been extremely helpful in hashing out this entire project and I'm very grateful.

A felony trial is at the far opposite end of the spectrum from an eviction trial. One is a large scale case where one side - after all, a felony is a serious crime handled by the criminal justice system, while evictions tend to be small claims matters handled in the civil system. Defendants in felony trials are far more likely to have attorney representation than tenants in eviction cases. The fines and penalties at stake are far higher when you're dealing with a felony trial. Most people don't wind up in jail at the end of an eviction lawsuit.

The bias is more pronounced as well. 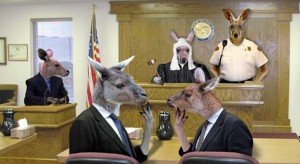 If the stats are to be believed, you may only be innocent until proven arrested. (No kangaroos were harmed in the process of nicking this image from 4closurefraud.org.)

According to the Illinois Supreme Court's annual reports, from 2004 to 2011 the average annual conviction rate for felony cases in Cook County was between 67% and 74%, with the cumulative average at 72.02% convicted. Looking nationwide the conviction rate is even higher. According to the Sourcebook of Criminal Justice Studies, in 2010 about 91% of felony cases heard in US District Courts resulted in a conviction. In other words, if you're a tenant in an eviction case you've got a far better chance of staying in your apartment than someone on the stand in a felony case has of staying in theirs. In fact, I'd go as far as to say that compared with felony cases, the so-called "bias" in Cook eviction cases looks downright even-handed and totally fair.

So, comparing evictions to felony trials is not really an apples to apples comparison. It's more like comparing apples to airplanes. I thought I should look at something lower key, like parking tickets. While I could have done a FOIA request to find out the exact stats, the Red Eye and the Tribune have both done relatively recent studies about contesting parking tickets. (The Red Eye article is no longer available online.) I've had about enough of extracting research from government agencies this month so I'm going to trust their numbers even though they're a little dated.

If you contest a parking ticket in person or by mail, you're technically appealing your conviction of a parking violation by means of a trial at the City of Chicago's Bureau of Administrative Hearings. If we were to get nitpicky about it, you're a plaintiff/appellant and the City is the defendant. 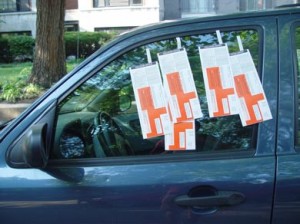 Or perhaps you're innocent until proven double-parked?

According to the Trib research, in 2007 62% of tickets contested by mail were dismissed, and 56% of the tickets contested in person were dismissed. Fast forward to 2009, after privatization of the Chicago parking meters, and 72% of the contested tickets were dismissed. If the trend has remained consistent, this means that you've got a better chance of winning when you contest a parking ticket than you do if you're a landlord trying to evict a deadbeat tenant.

But wait a minute. If felony cases AND parking cases both make it easier for the plaintiff to win than eviction cases, does that mean that the courts may be biased against the landlord after all? If every other scenario gives you a 72% chance of winning, while you've only got a 62% chance in an eviction case, then yes, I'd say so. However, we've got another even more precise scenario to consider: national statistics for contract disputes.

On Wednesday I paused for a moment to mention that we're only looking at situations where the landlord sues the tenant for non-payment, and largely neglecting situations where the tenant takes the landlord to court for negligence or other matters. The latter type of lawsuit is considered to be a contract dispute, and fortunately the Bureau of Justice Statistics has a whole lot of information about those. In fact they've got so much info that I've been able to make a handy chart with three years of data, comparing the verdicts in all types of contract disputes.

NOTE: The "rental/lease agreement" cases here refer largely to situations where the tenant is suing the landlord. They are not evictions.

Wow that's a lot of data! There's several very important things we can learn from this chart.

Secondly, we learn that anywhere from 55-65% of all contract trials nationwide are found in favor of the plaintiff, and the numbers have increased over time. Also, the lion's share of these cases have averages over 50%, indicating that when it comes to contract trials the idea of a 50/50 fully balanced court system is a pipe dream. Only employment discrimination suits are hovering anywhere close to the 50% mark that would indicate a completely fair court.

Thirdly, we finally have some data on what happens when the roles are reversed! I mentioned on Wednesday that we weren't going to spend too much time talking about what happens when tenants sue landlords, but in this case the USBJS Reports made it nice and easy for me to pull some numbers. They couldn't be more perfect.

When a landlord files an eviction case in Cook County, 62.8% of the landlords eventually win.

When a tenant sues their landlord nationwide? Anywhere from 62.5 and 64.9% of the tenants win. 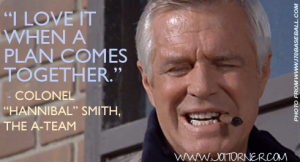 I had this article all set to go to print when an email from Chicago Landlord Tenant attorney Rich Magnone sent me in an additional direction. He wondered how the stats held up against other local counties that are purported to be more friendly to landlords. I wasn't able to find that particular information - for all that Cook County made my quest for knowledge a challenge, they were far more forthcoming than the suburbs. I did, however, find a great article on New York city housing court (PDF)with a fantastic chart. 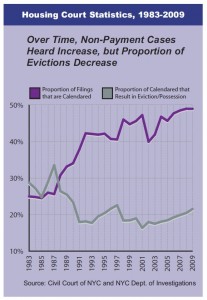 Courtesy of the New York City Rent Guidelines Board.

This is a fantastic chart and I wish we had this kind of data for Chicago. In New York not every eviction case winds up with a court hearing. Many settle out of court. The ones that don't, and wind up going to a court date are considered to be "calendared." This means that this chart eliminates everything except for those cases which made it all the way to the judge.

The line that really demands attention is the lower grey one - that's the percentage of cases that were successful on the part of the landlord. Remember that in Chicago we're looking at 62.8%. In New York City it's apparently been hovering around a 20% success rate since the early 90s. You want a system that's unfairly biased towards the tenant? You got it. Chicago is ridiculously tilted towards the landlord by contrast.

Evictions and FOX News: Fair and unbiased, for certain definitions of "fair" and "unbiased"

While our 62.8% average for cases found in the landlord's favor is technically biased when viewed in a vacuum, it's pretty much as fair and unbiased as you're going to get once it's put next to its closest judicial relatives. Compared with the defendant's chances of winning felony trials, foreclosures and Chicago traffic court, the 1 in 3 chance of a defendant renter winning an eviction case seem downright rosy. Compared to the situation in the New York housing courts, Chicago landlords have a cakewalk.

Overall what we've learned here is that any bias existent in Cook County eviction cases is not related to the evictions themselves. It's reflective of a nationwide inherent bias towards the plaintiff seen at many levels of the system. The judges don't hate landlords. If anything, they hate defendants.

It isn't my place to criticize the entire justice system. It's based on a long history going back to the Classical era and I am merely a housing nerd with a quiet fancy for "Law and Order" reruns. As much as we know deep down that it's an unbalanced system, it's the best we've got right now. Rich Magnone wisely pointed out in his email to me that any landlord who's willing to go through the filing process probably has a good case. This is a valid point, and I think it carries over into the court system in general. Winning and losing is not a matter of luck. This is not a casino. If you can sustain your righteous anger long enough to press charges and get in front of a judge, chances are you've got a very good and believable reason.

So, if you're a landlord or tenant, maybe hold off a bit on complaining about the state of evictions in the Chicago area, because it isn't all about you guys. A 50/50 split is probably impossible.

Monday we'll take a pause in this saga and enjoy the first installment of Rent Bacon in its new form. Wednesday I'll be back to dissecting the eviction data with a focus on location, location, location. Cook County has six different courthouses. Do you get a better result at one over another? Come on back and find out! (In the meantime, please share this series with your friends? It would mean a lot to me.)