Chicago Renters and Owners: A Snapshot

I'll be off on Friday for the Thanksgiving Holiday, so I thought today we'd do a chart-based photo essay. As I promised at the end of Monday's article counting Chicago apartments, I went back into the American Housing Survey from 2009 and dug up some more results. There's a little something for everyone in the following charts and graphs. Take home a few select morsels to argue with Uncle Bob about at the dinner table. 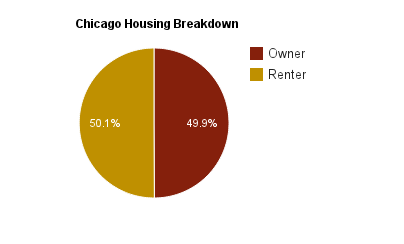 END_OF_DOCUMENT_TOKEN_TO_BE_REPLACED

In the near future I'm going to have need of a reasonably accurate count for the total number of rental units in Chicago. I had pulled a quick figure from the National Multi-Housing Council earlier this year that was around 550,000, but when I went back to check the updated numbers this week the count had fallen to 288,000. That didn't seem right to me.

It turns out that there's a wide variety of sources you can use to count rental units, and the total count depends on how you slice & dice the city. Do you count vacant units? How about condos for rent? Do you count units that the city doesn't consider to be legal, like some garden apartments? Do you consider just the city of Chicago, or expand it to include all of Chicagoland? In the process of researching this article I considered a number of different sources, including government agencies like HUD and the census bureau and private industry sources like the National Apartment Association and the National Multi-Housing Council. I ruled out the private sources early on, as they tend to hide their data behind hefty paywalls and remove historical data from public view.

That left HUD and the Census Bureau, departments that tend to work together to come up with Housing surveys. They do three of note - the American Housing Survey, the Housing Vacancies Survey, and the American Community Survey. All three address the Greater Chicago Metropolitan region, but that extends all the way down to Joliet. I wanted numbers for just Chicago. After reviewing all of the data, I settled on the American Housing Survey as my source for numbers. It has Chicago-specific data, a new report is generated every two to four years, and historical data is available online for free going back to 1975. It isn't the best - the most recent data is from 2009 - but it's specific and detailed.

2009 was the bottom of the most recent slow rental market. Vacancy rates for that period in Chicago were between 9 and 15%, depending on which source you use. Currently vacancy rates are far lower, more like 4.5%, and predicted to dip down to below 4% next year. It is my hope that in the next 12 months we'll see an updated survey that reflects the recent fast market.

Before we proceed, let's discuss the true vacancy rate as compared with the reported vacancy rate. The AHS survey counts every unit, regardless of if it's rent ready or not. A large number of units could be sitting vacant but not in good enough condition to be occupied by anyone. Therefore, in 2009 you'll see that the True Vacancy rate was around 14%, while the pundits reported the rate to be closer to 9.1%.

This discrepancy is one of the reasons why I focused on the census results as opposed to any commercial entity. The Census Bureau, tied to HUD, has not reason to rule out any building. Their numbers will consider all portions of the rental market, regardless of habitability, ownership or sale value.

Of course, a one year sample wouldn't suffice. Statistics always are more useful with comparison points. So I went back and pulled the same statistics from 10 years earlier, in 1999. I did this as a general point of comparison, but it's also worthwhile to note that 1999 was a similar market to our current situation - reported vacancy rates were at a very low 4.2%, with actual vacancy rates per the census bureau hovering around 10%.

So Chicago lost about 30,000 rental units over the decade between 1999 and 2009. That makes sense, as many of those units were converted to condos. You'll note the shift in the breakdown of apartments - the mid-size buildings with between five and fifty units bore the brunt of the conversion craze, and saw a drop in rental population accordingly. Now, compare the numbers for rented single family homes and condos. Back in the late 1990's very few renters were utilizing these units. Ten years later after the collapse of the housing sales market both sectors saw 30-40% growth among the rental population, reflecting the tendency of underwater sellers to turn landlord for a while.

Overall though, it looks like our answer for the total inventory of rental housing in Chicago is somewhere between 550,000 and 600,000 units, with actual vacancy rates consistently about 5% higher than the reported vacancy rates due to the burying of illegal or otherwise unlivable spaces. Each apartment houses an average of 2.3 people, and in a typical year the city turns over about 27-30% of its apartments. This is considerably below the National Apartment Association's stated national average of between 42 and 54% annual turnover for market rate unit, but within range of their 19-33% natioanl average turnover rate for subsidized housing.

The AHS analyzes a lot of other great bits of data which I'll delve into on Wednesday. Let me know in comments if there's something you want me to dig up. See you then!

That article up there? It's written with one purpose - to make you panic and buy stuff.  Courtesy of CNBC.com comes some hype about the rental market. Apparently a new report from Zillow shows rents rising in almost perfect proportion to home sale price falling nationwide. They specifically talk about the high year-over-year rent growth for Chicago, as shown in this month's Rent Bacon.

Investing in the rental market requires a level head that can stay above the hype. If you feel like you're running to catch up with the investment market, stop and take control of yourself.

Of course, the media will take any statistics on the housing market they can get and turn them into hype. If they don't provoke your emotions, you might use your logic to make a decision, and that never works out well for them nor for their advertisers. But they are trying to manipulate investors in the rental market by using the same tactics as those that worked to make home buyers and sellers all crazy and depressed.

They're doing it wrong. END_OF_DOCUMENT_TOKEN_TO_BE_REPLACED