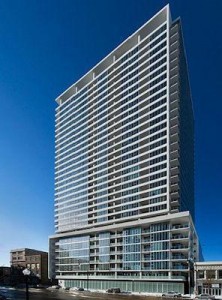 Second verse, same as the first.

A few weeks ago I did a little overview of what the average Chicago apartment looked like. It was pretty popular. But my office is on me for material that they can promote from their new social media campaign, and they're not so pleased with all the rentals that I do. (They are a residential sales brokerage, after all. They want me selling stuff, not renting it. Hint hint.) So, we're going to do the same thing with condos today as I did with rentals before - find the profile of the average condo and then pick out a few from the recent sales bin to show you what they look like.

What's the point? Well, if these are all hovering around the median price point for recent sales, then you can reasonably expect to find something comparable at or around this price in the immediate future somewhere in Chicago. Prices have started to tick upward, especially at the lower end of the spectrum, so we may not see this as the average for much longer. More importantly, this serves as a historical snapshot of what the average Chicago home buyer could afford to purchase in 2012. END_OF_DOCUMENT_TOKEN_TO_BE_REPLACED

Remember these two-flats from last week? Time to pay them another visit. We're hunting for the average Chicago apartment.

When new tenants are moving to Chicago they're often shocked to discover that most of the city does not consist of skyscrapers and that most of the apartment buildings are actually approaching a century old. Yes, we have apartments that you can afford, but they may not mesh with what you have in mind when you think of a Chicago apartment. Looking at the housing stats from City-data.com one can paint a picture of the most common apartment in the city. It has two bedrooms, in a building between two and six units, and was constructed prior to 1939.

The HUD guideline for an affordable apartment is one that costs no more than 30% of your income. (According to a 2009 report from the Metropolitan Tenants Organization, 53% of Chicago residents spend more than that, but oh well. We try our best.)

Today I've put all of this together and went in search of vintage 2 bedroom apartments currently on the market for $1150 to $1200 per month in smaller buildings. I didn't find many - only 12 came up and only 6 of those had photos worth sharing with you. All but one of the listings are at least five miles out of downtown, and you'll notice a distinct absence of name brand neighborhoods in the lot. But I've assembled photo galleries of those six apartments after the jump to give you an idea of what the average Chicago apartment looks like, and where it can be found.

(Oh, and by the way, if you want to rent any of these I can show them to you, provided they're still on the market by the time you find this article. Shoot me an email and we'll figure something out.)