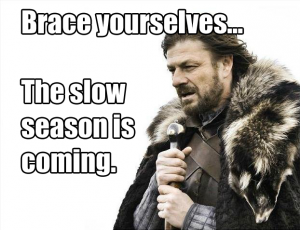 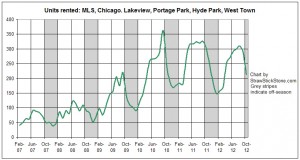 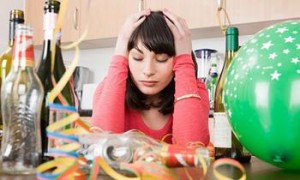 Really the next time we'll see decent demand is for the April 1 rental market, and the supply of apartments will shrink accordingly. Many landlords will go out of their way to avoid wintertime vacancies, offering bizarre lease lengths and making it far more difficult for tenants to break their leases between October 2 and February 28. But when you have to move, you have to move. In fact, I'd say based on personal experience that most of the folks moving in Chicago in the winter are doing so under duress - normally either a change in job or a change in relationships status. If you're moving in the winter in Chicago, here's a quick run down on what to expect.

With the exception of some of the big REIT apartment buildings downtown, Chicago landlords learn very quickly to avoid midwinter vacancies. Most of the apartments that are empty during the colder months of the year in Chicago are accidental vacancies. They generally fall into three categories:

Apartment hunters will not see many occupied apartments in the winter, unless a tenant is trying desperately to sublease their own apartment. If a landlord is showing an occupied apartment in the winter it means that either that landlord is very inexperienced or the tenant has politely given advance notice of their intention to break the lease instead of just taking off. These are few and far between, though. Most will have been sitting empty for a while. Plan on needing to do some dusting when you move in. 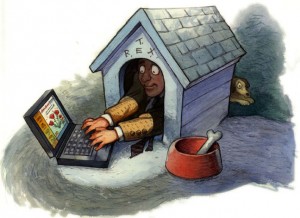 Of course, if you're one of the many recently-separated wintertime movers you may be OK with moving today.

During the peak market of the warmer months, I generally recommend to my clients that they start looking about 30-45 days before they need to move unless they have very special needs. In the winter, this all changes. Landlords forced to heat empty apartments are going to want to get them filled as soon as possible. It becomes more difficult to convince a landlord to hold a place off the market for 6 weeks when the place is move-in ready and that landlord is losing cash flow every day.

Don't be alarmed if a landlord offers you either a very short term or very long term lease. They're trying to get your term to end during the summer months when the potential tenant pool is much larger. On the bright side, the available selection of apartments is also far larger in the summer, so the landlord may actually be helping you out by offering a non-standard lease.

It proceeds logically that this is also one of the reasons why month-to-month leases are rare in Chicago. With nearly half the year spent in "down time," a landlord who allows a floating move-out date is running a pretty high risk of a wintertime vacancy. (Not to mention that a month-to-month lease in Chicago is usually just a verbal agreement with no written documentation behind it. This is the 21st century, folks. I would not.)

Sidenote - if you're working with a Realtor make sure you're clear on how a lease with an abnormal term will affect their commission, especially if you're the one paying it. Many Realtors' commissions are proportionate to the length of your lease. If a landlord offers you the choice between an 8 month lease and a 14 month lease, make sure you take the one that works for you, not the one that will net your agent a higher paycheck. 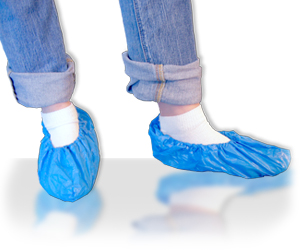 Swanky listing agents will offer booties to cover your shoes. They don't work so well with 4-inch heels, though, so stick with a pair of easily-removable flats if you can.

Footwear: None | Heat: None

As soon as the ground starts getting wet, expect listing agents and landlords to request that you take your shoes off before entering their apartments. I generally carry a shoehorn in my purse all winter to ease the process during multiple-unit tours, but it's better to wear shoes you can get into and out of quickly.

Also, remember where I mentioned that the landlord was heating an empty apartment earlier in the article? Don't expect the temperature in these units to be much above 50F. They're keeping the pipes from freezing but any more than that would be a waste of fuel and money. Steam heated buildings will be sweltering, the rest will be pretty chilly. Dress appropriately.

Given the large number of wintertime broken leases that result from terminated relationships, it's no surprise that the apartments they leave behind are on the larger side, while the newly single refugees rapidly absorb any remaining studios and one-bedrooms. Tenants unwilling to move in and face immediate peak heating bills will also avoid renting larger units so they tend to stay empty for longer in the colder months. Unless you are prepared to decide very quickly on an apartment and pay a premium, expect that most of the selection will be bigger than normal.

Pricing and the slower market pace are two of the very few advantages to off-season apartment hunting in Chicago. With lower demand and landlords unable to fully staunch the loss of tenants due to unforeseen circumstances, the market becomes something of a clearance sale. Rents relax a bit. Market times lengthen. Landlords beaten by the season may ease off on their stringent background check requirements and be willing to give weak applicants a "test run" on a short lease instead of turning them down outright.

As is often the case when browsing the clearance rack, the selection may consist of stock that many others have passed over. However, if you're really out for a good deal the winter may be your best option.

Of course, if you're a looking to rent or sublease an apartment in the winter that's a different story. You've got an uphill battle ahead of you, even in this strong landlord's market. Contact me to figure out a strategy to get your apartment filled with the least downtime possible.