There are many varied types of apartments in Chicago, each appealing to a different audience. In this new "Field Guide" series (updating on a sporadic basis) I hope to cover some of the local species of apartments. Learn to spot, capture, tag and, if necessary, release them back into the wild.

Today we'll be starting with the Garden Apartment and its variants, the English Garden, the Fake English, the In-Law apartment and the Duplex down.

The Chicago garden apartment (Apartmentus fundamenti) can be found throughout the city although they rarely make an appearance in the downtown area. Any apartment with the majority of its square footage at or below ground level is referred to by Chicagoans as a "garden unit." It is a regional term which can mean anything from sidewalk level to deep basements. Nearly every Chicago apartment building under 7 stories will have at least one garden unit.

Formerly used by building owners for themselves while renting out the more expensive upstairs units, garden units have become more available to the tenant pool over time as apartment buildings get bought up by outside investors and others got converted to condominiums. While gardens have long been maligned as dangerous, with higher potential for break-ins, floods and pest control problems, they have their fans.

... Okay maybe it's only that last reason that really matters. A large of people won't consider garden apartments at all in their housing search. The lowered demand leads to much lower prices. Garden units in the Chicago MLS over the past 5 years have rented for about 30% less than their upstairs cousins.

Many new condominium buildings included garden units in their inventory. The city will ensure that a certain number of apartments will always remain accessible to lower income renters and those with limited mobility. Low priced garden apartments will therefore likely always be part of the Chicago landscape.

The competition for them is much less than what you see for the upstairs units, one can not only expect a wide variety of them to always be available, but also to have more time to decide between them than you would have in choosing a 1st floor unit or higher.

However, with the county and city governments short on funds they may start cracking down on the many garden apartments that exist and generate income for their owners but are not currently reported on the tax rolls. An intensive inspection campaign could take maybe 1/3 to 1/2 of the currently occupied garden apartments in Chicago offline. The increase in property taxes resulting from such a campaign would force landlords to raise rents accordingly, so we can hope they continue to avoid too much scrutiny for now.

Traits to Watch for 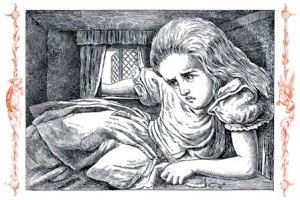 If you encounter a garden apartment in the wild, you don't need to be frightened. After all, it's spent decades housing the type of people who gave rise to the term "basement dweller." It's just as afraid of you as you are of it. Here's some tips as to how to approach a garden apartment safely.

The English Garden (a. fundamenti britannia) is at ground level or at most one or two steps up or down from the sidewalk. True English Gardens can be quite pleasant. Many have full sized, normal windows, comparatively normal floorplans and ample sunshine. An English garden plays nicely with small children and the elderly, and should not be ignored if spotted in the course of an apartment search. 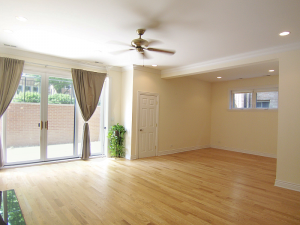 The Fake English Garden (a. fundamenti madonnae) is my own term. Found only in post-1990 construction, the Fake English is set substantially below sidewalk level, but with a large sunken terrace serving as a front yard and entry through full-sized sliding glass doors. These units feel like they are at sidewalk level due to the manner of entry, and can have good light. In some cases the sidewalk is cut down to floor level all the way around, allowing for full size windows throughout. However, in others the ground comes up against the walls once away from the entrances and the middle rooms can suffer from the same low light conditions as a standard garden. On the plus side, Fake English gardens are generally of newer construction and may offer more modern appliances and amenities than normal for their price range.

The In-law apartment (a. fundamenti illegalis) was, as the name implies, created for the in-laws of a property owner to inhabit. This term can also be applied to any number of other peculiar configurations of questionable legality, although it is not a legal term for real estate agents to use in print advertising for fair housing reasons. In-law apartments may share utility meters with other units in the building, require entry and exiting through another apartment or through a boiler room, or have extremely low ceilings. The county assessor may not know that the unit exists. If you spot an in-law apartment your best bet is to avoid it at all possible cost. Unlike its benign brothers, renting an In-law apartment could result in an eviction if the unit is not legal in the eyes of the City of Chicago. While there are over 2000 different pieces of code that can apply to an individual apartment to determine its "legal" status, it's best if you simply dodge the peril and rent a less dubious apartment if at all possible.

The Duplex Down (a. fundamenti gigantura) is a two-story hybrid of a first floor apartment and a garden apartment, or a first floor apartment and a basement storage room. They are found predominantly in condominium conversions of vintage buildings and in newer 4-8 unit condo buildings. They are praised for having a similar feel to multi-story townhomes and offering ample privacy in roommate situations. However, duplex downs are generally the same square footage as their simplex cousins, but half of a Duplex Down unit is a garden. In fact, the lower level may be submerged far deeper than a standard garden would ever be.

Have you spotted a particularly interesting specimen of garden apartment? Share your experience with us in the comments!