This is the end of Rent Bacon as we know it.

Today I'm posting the Rent Bacon data for two months: November and December 2012. It is the last time you'll see it in this format. Next month we're going to repurpose Rent Bacon in three ways.

One of my pet peeves with the Chicago rental industry is the tendency of Realtors to leave their listings active for just a little too long. I've discussed this concern over leaving listings active for too long at length before. However, I took this matter into consideration when I started doing Rent Bacon last year. In order to make sure all of the leases for a given month are included in the stats, I've been waiting an entire extra month and therefore running 2 months behind with the data by the time it's printed here.

We aren't going to do that anymore.

Since Rent Bacon is basically a year-over-year snapshot of how the city is doing in any given month, I'm thinking that missing the listings of a few tardy Realtors will probably not sway the numbers too drastically one way or another. What's more critical is providing up-to-date information that can inform folks who are entering the market right now. Two month old data doesn't help. One month old data isn't much better but at least it's a step in the right direction. 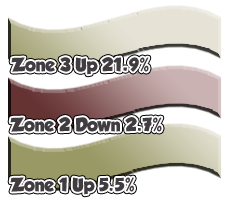 December Rent Bacon. Zone 3, what are you doing?

Secondly, Rent Bacon has thus far been a strict month-vs-month comparison of rent rates and market times. Given that the market fluctuates wildly on a seasonal basis, we can't do a large scale rolling average encompassing the entire year. However, given that we're looking at a very particular subset of apartments - two bedroom, two bathroom units to be precise - this can create some very small sample sizes when taken in one month bites.

We're also not going to do that anymore.

I've been considering the rent rates and the market times but I've largely neglected the overall activity of units rented in calculating the weighted global averages. While I've taken time to discuss the number of units rented, I haven't figured out a proper weighted average that takes that number into consideration. This will also change next month.

Anyhow, that's all in the future. For now, let's take one last look at Rent Bacon as we've known it.

Looking at the data for November and December it becomes plainly apparent why I'm switching to three month rolling averages and expanding the scope to different sizes of apartments.

All three zones saw wild fluctuations and sample sizes about half that of their peak market volume. When the activity is so low, even a handful of rentals can skew the data pretty heavily.

Even with the funky numbers, though, we can spot some trends that are consistent between years. Both years saw market times double downtown in comparison to where they were in summer's peak market. Both also saw activity fall off by 50%. In both cases tenants renting in December got the lowest rents of the year, saving $266 per month over midsummer movers in 2011 and $276 per month in 2012.

Let me spell that out for you. By moving in December, those renters saved over a full month's rent over the course of the year - about $3300.

In the meantime, Zone 2 is getting greedy. Both November 2012 and December 2012 saw higher posted rents than 2011 - in fact, December 2012 saw a 10.5% increase in rents over December 2011. However paid the price for those high rents, with December 2012 market times 42.5% worse than they were a year prior. To see the name brand neighborhoods of Zone 2 posting an average 57 day market time at any point in the year tells me that prices need to come down fast and stay down until spring.

As for Zone 3, a 10.4 percent net loss in November followed by a 21.9 percent net gain in December is pretty much the whole reason behind the upcoming shift in Rent Bacon methodology for next month. 16 units is simply not large enough of a sample size to really give valid data. Zone 3's general demographic tends towards larger family groups, which means we'd probably find better data by reaching up to the three bedroom units. If you'd like to take the Zone 3 numbers at face value and price your 2 bed/2 bath rental at $1615 go right ahead, but I really don't trust that number.

Stats reflect pricing and activity for 2 bedroom, 2 bathroom apartments listed in ConnectMLS as with rented dates during the month of November and December. Analysis of specific areas is available upon request.