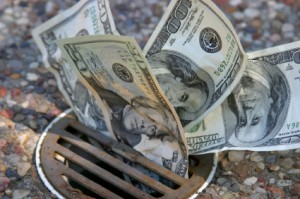 Possession isn't everything. Without a money judgment the eviction case is only half-won.

As the first part of a series investigating Chicago's rumored bias towards tenants in the residential rental sector, I did the general stats on eviction numbers in Chicago last week by means of a study of the First Municipal Circuit Court of Cook County's online dockets. I'm sure at least a few of you read that and are wondering what's up with the unpaid rent. Previously I only counted cases where possession was given back to the landlord. But these cases are brought to court when rent doesn't get paid for a long time. They're called Joint Action suits. The landlord wants not only possession, but the money back. If they win only possession, they've only won half of the case.

Now, Chicago judges are notorious for being tough to squeeze for rent judgments. Many landlords are encouraged to seek possession only, but if you're going to pay $237 in filing fees and take a day to head down to the Daley Center you probably want to get some cash out of it, too.

Today I'm following the money. If you're starting here, you may want to go back and read last week's entry (linked above) as I'm using the same methodology here.

As of last week the picture seemed pretty fair. For the cases that opened on February 1 and March 1, about half of the cases wound up with the landlord winning possession and the other half either saw the case dismissed or the tenant winning. This seems far less out-of-whack on the surface than the urban myth of Chicago's infamously tenant-biased courtrooms would have us believe. However, once we look at the money, we get a much darker picture.

After last week we had no statistical proof that landlords see any more success in their eviction cases when they lawyer up. This week we learn that there is a difference, and it comes in the amount of back rent awarded. Regardless, though, the real story here is about the total amount of back rent awarded. 49% of that unpaid rent - close to $150k - was allowed to remain unpaid even though the judge agreed to return possession of the apartment back to the landlord. In the majority of the cases where a money judgment was awarded, it was not because of any sort of compelling evidence. It was more likely because the tenant didn't even show up in court for their case!

So, the pro se cases did better in arguing for themselves in March, greatly outperforming the attorneys in getting at least SOME money judgments on their deadbeat tenants. (Of course, there's no way to enforce the judgments, but at least it goes on their credit report as a warning to other landlords.)  Neither attorneys nor self-defending landlords got much more than the amount they originally requested, if that. The judges must have been feeling pretty kindly towards the tenants on March 1, as less than a third of the back rent requested was awarded to the landlords. $113000 of back rent was allowed to evaporate.

Attorneys way outperformed the pro se landlords in the cases that started on April 2, although it should be noted that far fewer of these cases have completed as of this article's publication date.  However, across the board the judges were even stingier with the unpaid rent amounts, allowing $165k in back rent to remain unpaid.

Bearing in mind that the caseloads on each of these days was a little lighter than the statistical average given Cook County's annual case loads from prior years, we can estimate that the judges at the Cook County First Municipal Circuit Court are allowing over $150k of rent debt per day to go unpaid. There are about 250 working days in a year. So, about $37,500,000 in unpaid rent is being forgiven each year in one courthouse on cases where the landlord is technically considered to have "won" his/her case. (That's a little more than Kim Kardashian's net worth right now, for those of you who care. It's also a little more than the U.S. Department of Defense is paying Google to host their email in the cloud. It's a lot of rent.)

Does this mean the system is unfairly biased towards the tenant? I think that depends on who you ask. Obviously if the landlord loses their eviction case and doesn't even get possession then going after the rent is a moot point. But what about the cases when a landlord wins possession? When the judge says, "Yes, Landlord, you're right, the Tenant's a deadbeat, you can have your apartment back." Shouldn't the judge hold the tenants accountable to their lease contracts?

But what about how it seems from the Tenant's perspective? After all, if a landlord waits until a tenant is 3-4 months behind in rent, of course it's unfair to ask for the entire amount as a lump sum. If a tenant had 3-4 months worth of rent lying around in a lump sum they wouldn't be renting in the first place. However, given that the courts will not allow a suit to begin unless the tenant's already 2 months behind, and will throw out the landlord's case if they accept any payments while waiting for their court date, there's not much of an alternative for the landlords.

It looks from these stats like the best chance a landlord has of getting a money judgment is to hold the trial in the winter. There's a good chance that the tenant won't be able to get to the courthouse due to weather or illness, and the landlord will win by default. In the tenants' favor, holiday moratoria and court closures mean fewer opportunities for the landlord to force a case in this manner.

Maybe the landlords are slumlords and don't deserve their scummy money. I mean, sure, the tenant might not have paid, but what if that was because the furnace was broken or the walls were moldy? What if the check really did get lost in the mail 3 months in a row? What if the landlord is illegally billing the tenant for water? I'll grant that many Chicago landlords do not keep their properties in the best condition, so perhaps the results are accurate and the judges are just being fair. Possession may be due but the landlord might not deserve all of those withheld funds.

However, if we use the same criteria that we used last week to analyze these results, there's a definite bias visible. After all, if only 19-38% of the eviction cases brought before the court see a total win - money and possession - that's a definite minority. I somehow find it hard to believe that 80% of Chicago's landlords are engaging in the slumlord behaviors I just described above. If you look at evictions, Chicago's main county courthouse was strongly in favor of the tenant on at least the three days that I chose for my sample.

This series will continue next week as I start to pick apart the CRLTO. I'll probably revisit all of this in a couple of months to see if the stats hold up over time. In the meantime, let me know what you think in the comments!