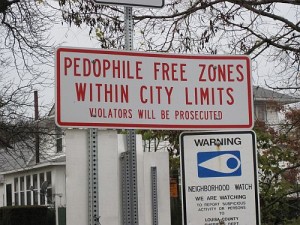 Megan's Law means sex offender registry information is available to the public, but is anyone using it?

I may get in a lot of trouble for this entry. Gonna do it anyway. This has become crimes & misdemeanors week here at StrawStickStone so I might as well finish in the same vein.

So most of us know that there are websites that US Residents can use to look up whether or not a registered sex offender is living in the immediate vicinity. California's "Megan's Law" and similar legislation in the other 49 states require the information to be freely available to the public. The registries are maintained by the FBI, Department of Justice and local police forces. They're pretty darn accurate.

If you're in Illinois, here's a third.

When the laws were first enacted, there was some pushback from homeowners who feared that publication of registered sex offenders' addresses would have a severely negative effect on home values. I've been wondering for years if this has actually been the case.

This makes sense - who would want to purchase a home on the same block as a sex offender? The public has attached itself to the idea, but very few studies have been done on the matter. Appraiser Randall Bell addressed the matter in 1997 (pdf), one year after the first "Megan's Laws" were enacted ("The Impact of Megan’s Law on Real Estate Values").

About a decade later, Leigh L. Linden & Jonah E. Rockoff did a decent study in 2006 of how the presence of registered sex offenders affected home values in Mecklenberg County, North Carolina - this is the area immediately surrounding Charlotte. They found that homes with in 1/10 of a mile of a sex offender saw a drop in value of about 4% and homes immediately neighboring a sex offender saw an average drop of 12%. ("There Goes the Neighborhood? Estimates of the Impact of Crime Risk on Property Values From Megan's Laws") Given that this was an era of generally appreciating properties, anything that caused a drop in value could well be interpreted as significant.

My Sources Say No.

My personal theory is that there are many other things that could cause a 4% variance in price when it comes to Chicago real estate. And while the Linden/Rockoff data might have been valid near Charlotte, NC six years ago, it is totally invalid for Chicago in 2012. Proximity to the El, side street vs main street, permit parking, ward boundaries - all of these could affect a price as much as a sex offender. And I believe that these other diverse factors have a far greater effect on home values than the sex offenders could possibly create.

We've discussed before that real estate is a very local thing. The sex offender density in Chicago looks a little something like this:

Courtesy of chicagopolice.org as of July 25, 2012. Click for full size.

So, that's the West Town community area, which I've chosen as a nice subset sample for display purposes. It contains Wicker Park, part of Bucktown and part of Humboldt Park. All the little A's indicate a registered sex offender who committed their crime against someone over 18. The C's are sex offenders who assaulted children. It's kind of crowded down there. You'd have to try really hard to avoid living within 1/10 of a mile of an RSO unless you moved within 500 feet of a school or park.

In 2006 when Linden and Rockoff were doing their report, a brand new website had just made it much easier to search sex offender registries. FamilyWatchdog saw a major surge in interest at its beginning and still remains the top national sex offense registry. However, as the Google Insights chart above shows, at the time of the report it was seeing far greater traffic than it has since. On top of that, in 2006 the rise of social media was just beginning - Facebook opened its doors to folks outside of colleges in September of that year, meaning we were definitely in the MySpace era already when the North Carolina research was occurring. In the interim six years we've grown to rely on Facebook and Twitter for our news, moved our web activity to mobile phones and moved on to other safety concerns.

Each state and some counties and towns all have different laws now for disclosure of registered sex offenders. As a Realtor in Chicago I am not required to disclose the presence of a sex offender living nearby a home that I'm trying to sell. An appraiser might disclose it if he/she felt it affected the home's value, but appraisals are very rarely seen by a prospective buyer and even more rarely are they read in depth. This means that for a prospective buyer or renter to find out that there's a sex offender living in the area, they have to look it up. For them to use it in negotiating a lower price (or choosing homes to view in the first place) they'd have to remember to make searching the registries a priority pretty early in the game.

If this kind of research was happening often enough to make a strong statistical impact on home values, one might see the site traffic for sex offense registries at pretty high volume, right? Well, that's where today's research comes in.

You'll definitely want to click this one to view it full size. These are estimates, but they are based on solid, legit sources.

At the top, in red, the approximate number of home sales in and new apartment leases on a month by month basis from the past year.[1]National Association of Home Builders: http://www.nahb.com/fileUpload_details.aspx?contentID=55761[2]National Multi-Housing Council: http://www.nmhc.org/Content.cfm?ItemNumber=55508 (Some basic arithmetic was involved.) At the bottom, in green, the estimated number of monthly visits to the top two national sex offender registry websites, FamilyWatchdog and the US Department of Justice's National Sex Offender Public Registry.[3]Compete.com (registration required) and Google Trends As another point of comparison, the IRS's website gets between 6 million and 34 million visits per month. And because I know you'll ask, the traffic to the individual states' registries combined is not even remotely equal to that received by the two sites that I tracked for the chart above. The number of researchers just isn't high enough to be statistically significant when it comes to the value of most homes.

By my best estimates, if every single one of the visits to the sex offense registries was someone on the verge of buying a house or renting a new apartment, then only 10% of the possible home-shopping audience is considering this to be a factor in their purchase. Common sense tells me that the traffic is not fully comprised of prospective buyers or renters. There's plenty of other people checking the registries, too. Employers, school administrators, prospective landlords running background checks, assault survivors checking the whereabouts of their assailants - all of these have reason to use these sites.

What does it all mean?

Should we stop worrying about the dangers and welcome these folks into our communities with open arms? Absolutely not. Recidivism is always a concern and the statistics about hyperlocal violence that made "Megan's Laws" necessary have not lessened in the 20 or so years since they were first enacted.

The only significance we see here is that the registries probably do not adversely affect property values in Chicago any more than a myriad of other factors.  I've heard many landlords use the assumed effect on rent rates as a reason for refusing to house RSOs. To my mind it simply does not have that kind of impact. The Chicago population is far too dense. As long as Illinois maintains its current approach to notification, the registries are simply another little-used government resource.

If you're a landlord checking out a prospective applicant, do the search for the sake of the other tenants in your building and so that you are aware of the risks that you're taking on. RSOs have a limited range of income sources available to them. Their personal lives may be affected. There may be restraining orders involved. By no means are you getting involved in a low-risk situation. But while it may be a hassle and a safety risk, it's not likely to be much of a financial risk in the long run. Other investors might shy away from purchasing the building with an RSO on the rent roll, but they might also shy away from buildings with subsidized tenants, buildings that allow dogs, buildings with old porches - the variables are endless.

If you're looking to buy or rent a home, and this is an important issue for you, make sure you let your Realtor know about it up front, and do your research independently as well.

Overall bear in mind that even in this age of social media & mobile data, there are some very valuable resources from earlier eras of the web that are still valid & useful. While I have no doubt that there's now an app for that (or several), none of them are going to be much help if they aren't utilized.

Questions? Comments? Concerns? You know what to do.