Home » All Entries » Square footage, room counts and other lies my agent told me

Above measurements are for Pre WWII walk-up buildings. Anything larger than that and the agent is either counting walls as part of the area or just guesstimating based on how the space "feels."

I would not be surprised if modern buildings are within the same noise, given that lot sizes in Chicago have been the same for a very long time. After all, we discovered in the bedroom size survey that the average Chicago bedroom is just 132 square feet, and many 2 beds in this city are a cluster of bedroom-sized rooms snapped together around a hallway.

Some folks get really hung up on square footage - they have it in their heads that their current home is X square feet, therefore to move up in size their new home must be X+Y square feet. However, most of them are going off of the square footage rattled off by the agents who showed them the place to begin with. Unless your agent also happens to be an engineer or developer with plans to back up their numbers, don't believe it. There's plenty of folks like my email buddy up top who will bulk up the numbers based on "feel" instead of the real thing.

Recommended substitute: the MLS also has a section for room sizes. These are much harder to fake, as you can spot check the agent while you're on site with a tape measure. Measure your rooms before you start looking and base your comparisons off of those numbers instead.

Rooms: Counting outside the box

So we can kind of understand why square footage measurements are frequently way off. After all, the agents are trying to sell the home, and the MLS does allow them to include "estimated" square footage. (This is what happens when MLS rules are written by agents without much consumer input.) Most agents are not engineers and you can't expect them to know how to use CAD. Most agents have a moral fiber somewhere between me and the fellow from the email. But one hopes that an agent can at least provide the correct number of rooms, bedrooms and floors in a home that they're selling. 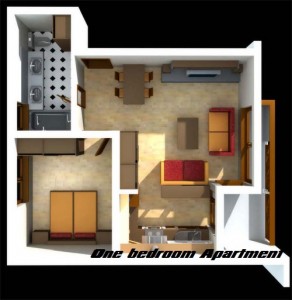 Presenting the four room one bedroom. No, seriously. (Courtesy of homedit.com)

Well, let's take a look at the MLS rules for defining rooms. Here are some choice excerpts from the MRED LLC Room Counting Publication, January 2010 edition:

This means that a one room unit with kitchen fixtures along one wall could theoretically be counted as a 4 room unit with Kitchen area, office nook, combo dining room and sitting area.

But certainly bedrooms have somewhat more structured rules? Maybe not.

Nothing is said about "a bedroom must be able to fit at least a twin bed." Nothing about "a bedroom must have a window." Fortunately the Chicago's building code requires at least 70 sq ft of floor space for the first bedroom, 35 sq ft for additional kids rooms, and ceilings of a least 7 feet in height. Realtors aren't required to know or disclose this, though. 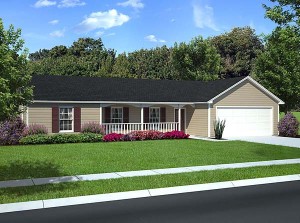 Okay, so we can't trust the room count and the linen closet could be considered as a bedroom and a section of the living room is suddenly a dining room, but at least we can be sure that the property is a 3 story house, right?

So let's pretend that we're unscrupulous agents who want our listing to show up in as many MLS searches as possible. We've got a single-story ranch for sale. But hang on... according to these rules, the room with the front door is on the "Main Level." The room with the back door could be considered as a "Walk-out basement." The bedroom, being immediately under the eaves (along with the rest of the house) is in the "attic." Congratulations, we just turned a one-story home into a 3 story home without installing a stairwell, building an addition or digging up the yard.

Why would an agent want to do this? After all, prospective clients will get annoyed when they figure out how you've fudged the numbers. However, they saw your listing, and they'll definitely remember it now. And maybe it will change their mind about really wanting a 3 story house. And you can go back to your seller and say that 30 more people saw the listing, even though they saw it and because of the number fudging they will never come and take a look in person. Any attention is good attention, right?

But aren't there ethics laws about this kind of thing?

Certainly. If an agent has actual knowledge that something in their listing is incorrect, especially if its regarding the structural condition of the property, then yes, they have to correct the problem. However, even if an agent can find the right button in the MLS to report a violation, and even if they are reported to their broker and their Realtor association for ethics violations, the chances of them actually suffering any ill for these kinds of exaggerations are pretty slim. After all, "puffing," also known as advertising exaggeration, is legal within real estate. That's why a condo can have a beautiful lake view... if you walk all the way to the end of the balcony...and lean way out... and crane your head around... with a periscope.

"Cost per square foot" is used as a benchmark to assess comparative value between neighborhoods. At a commercial level it's relatively useful as most retail and industrial spaces are rented by the square foot. If you're renting a storefront or a warehouse, chances are pretty good that the square footage listed is accurate, and cost per square foot numbers are pretty close to true. At a residential level, though, the estimations explained above make it a completely useless number. In fact, considering that it's frequently used to show how property values are increasing, it's actually a self-defeating number. The cost per square foot on a $200k condo is a lot lower if the square footage is bulked up from the actual 930 to the agents' estimated 1300.

So if it's detrimental and useless as a true metric, what purpose does cost per square foot serve? Shouldn't it be totally discarded? I would suggest that the reason for its retention lies in psychology. There is a tacit myth out there that someone who does math for you is working harder for you. A simultaneous assumption is that folks who do more math are somehow smarter. Agents want to seem like they work harder, know more about the area, and are on the whole more intelligent than the next guy. Every aspect of a Realtor's pitch is going to be aimed towards convincing you of their outright superiority compared to the rest of their competitors. Cost per square foot has an implication that they've gone to the ultimate end for your business - they've done math for you. Even though that math has generated a totally useless number, and could actually be hurting your chance at a sale.

The other question is of course, how do you replace it? If the numbers were true, cost per square foot would likely be a very useful number to know. You can't go based on cost per room, as the room counts can be exaggerated just as much as the square footage. The only close and reliable metric I can think of to replace cost per square foot is property tax assessments, and that requires depending on the Cook county government to come up with a precise number. As we discovered in the Property Tax Appeal stats article, this is unlikely to occur.

Insisting on a particular amount of floor space is fine if you have a lot of furniture, but what's most important is finding a home that fits your lifestyle and traffic patterns in a practical way. You can always sell off excess furniture purchased to accommodate your current space, and downsize. You can always pick up more furniture to fill a space that's too big. Unless you know that you absolutely have to fit Aunt Vera's massive china cabinet or something similar, the raw measurements matter less than your comfort level in any particular property.

Methodical folks who want to focus on the apples-to-apples numbers can certainly do so as long as you bring your own tape measure and don't believe a word of what's printed in the listing. Just remember when all the measurements are complete to take a moment and think through how you would actually live in the spaces that you're viewing. After all, most of us don't spend our time at home counting the dimensions of our walls. Once we've moved in most of us don't give much thought at all to the size or square footage of our homes. The whole reason why agents can get away with square footage hyperbole is that most folks have no basis for comparison in their heads at all.

The best ethical option when listing a home for sale or rent is to leave the square footage field blank. If you know the actual square footage it will pale in comparison to the listings where the agents have made up numbers out of whole cloth. If you don't know the numbers and let your agent make something up, you're risking wasting the time of those clients who really do need an enormous space, and wasting your own time clearing out of your house during showings that will never turn into a sales contract. Provide the most accurate room measurements you can, and if you feel like springing for a real architect's floorplan do so, but don't estimate, please.

As for the best option when buying or renting a home? Measure your current room sizes and measure your largest pieces of furniture from which you are unwilling to be parted. Make sure that stuff will fit. Beyond that remember the old adage about sizes of ships and tidal patterns, and you should be set for clear sailing.