SearchChicago Scored 14 out of 40 points. Find out Why.

I get a ton of showing requests from clients visiting this site, and it's easy to see why. Most of the listings are syndicated from major real estate brokerages in the city, so they seem legit. The site is sponsored by the Chicago Sun-Times, which adds to the air of legitimacy. However, their diversity is quite weak. SearchChicago seems to source its apartment listings from the real estate brokerages who pay to syndicate their listings, and from sublets.com. This means they only get a subsection of the Realtor apartment listings and a handful of last minute lease breaks. Their inventory is minimal. They only list 14 apartments for rent in Albany Park right now. The MLS, by comparison, lists 25.

Relying on the MLS and tenant-priced apartments also means that there's a dearth of lower-end rentals.The price range is decent - $1050 to $4500 in Lincoln Square - but competing site Hotpads.com has several in the $695-775 range in the same area.

In terms of listing diversity I give them a 4 out of 10.

As far as suspicious listings go, I'm not seeing many fakes. Sourcing their listings from Realtors means that most of their apartments are going to be exclusive listings, vetted by real estate professionals and printed in the MLS. MLS members get fined pretty heavily for infractions such as posting fake addresses, so the majority of these listings are likely to exist, or to have existed at some point. (We'll address this more in a moment.)

However, the site has chosen to also slipstream in listings from sublet.com. As I mentioned in a comment to the scam article linked above, sublet ads are some of the worst offenders for taking renters for a ride. You pay your money, they take all your financial data, they run a background check... and then run off with your identity. With only 4 out of the 33 ads that I inspected coming from sublet.com, though, there's very little impact on the overall safety of the site.

In terms of legitimate listings, I give them an 8 out of 10.

I chose to inspect all of the listings in the Lincoln Square area of Chicago, since it's an area I know quite well. When I pulled up the detail page, I was confronted with the following map: 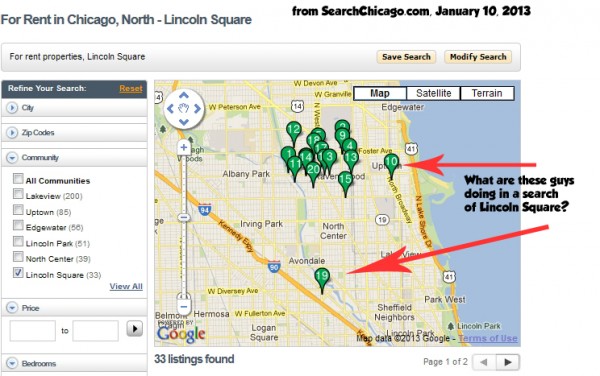 I also noted that when I went to load up the site, it took a good 45 seconds for the initial search page to appear, and another 30-45 seconds for each subsequent page. Even an MLS search is faster than that. While the site lets you search by city or by neighborhood, both require you to choose your regions from text based lists - no map search is available until you've already chosen a master area.

Since all of the listings could be cross-referenced against other sites, researching freshness was easy and I was able to get quite thorough about it. I went in and dissected all 33 of the Lincoln Square rental listings on SearchChicago.com The news isn't good.

Of the four sublet.com listings, three had already been deleted.

The remaining 29 listings were from assorted real estate brokerages. Out of those 29,

This means that 18 out of 33 listings in the neighborhood are a complete waste of your time, and at least six of those listings have been hanging out just to waste your time for over two months. So what about the other listings?

In one extreme case, a house is listed for rent by two separate brokers. One had the exclusive listing from September 12 to October 23. His SearchChicago ad is still visible (two months later) at $2500/mo. The landlord then cancelled the listing and switched to a new broker, who has had it since October 24 and has an ad on SearchChicago at $2250/mo. The current list price in the MLS? $2000.

So this means that 54% of the properties are unavailable, 18% are the wrong price, 15% are probably overpriced, and 9% of them are duplicates.

For listing freshness I give SearchChicago.com 0 out of 10 points.

Is this the Realtor's fault?

"But Kay," you say, "why don't these Realtors request that the ads get taken down?"

Speaking as someone who has an ad that's been sitting out of date on SearchChicago.com since November, takedown requests do not work. The only way I've ever had an out-of-date ad removed from this site was to call in to the Sun-Times and explain that their practices could very well cause me to lose my membership in the Chicago Association of Realtors. It took 45 minutes on hold, during which time I was passed to three different departments, none of whom knew how to take down a rental ad.

"But why do you even allow your ads to appear in the first place?"

Good question. My employer syndicates ("blasts") my listings to a large number of websites. I'm not able to opt out of any of them. The sites that receive the content are packaged together under 8 large umbrella syndication groups. I can't opt out of SearchChicago.com without losing about 300 other sites that have more appropriate policies for removing stale content.

I do keep a form email that I use to respond to the unfortunate souls who wind up using SearchChicago.com, explaining why they might want to consider a different source for their apartment listings. I have used it four times this week in regards to an apartment that I listed in October, and rented before Halloween. The site doesn't even have my original descriptive text in the ad. They've mistakenly combined it with the text for a condo in Oak Park.

Why do people use SearchChicago? 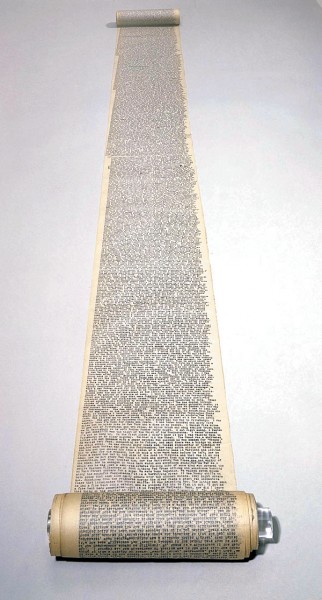 Is this your apartment hunting checklist? I found it last week in the middle of Wicker Park. Maybe you dropped it?

The apartment seekers who contact me from SearchChicago ads are always looking towards the lower end of the price point for their target neighborhoods and have a huge number of wants and needs on their list for an ideal home. My guess is that they only wind up at an obscure site like this once they've exhausted all of the options on the better-known sites like Craigslist and Zillow. They see a whole bunch of apartments that they've not encountered anywhere else - because they're no longer available - and think that they've hit paydirt.

Protip: if this describes you, you're being too picky about your search. Either up your budget, get a roommate, or scale down the wants & needs to something a bit more mundane.

If any of you have a rental site that you'd like me to review, drop me a line and I'll move it to the head of the list. I'll probably do another one of these in a few weeks when I'm feeling snarky.