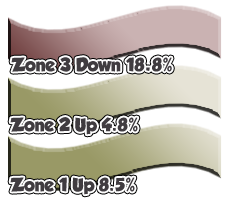 Ladies and Gentlemen, It's the Offseason!

Remember last month when I said that the August rental stats would probably be the last reliable analysis we get on the Chicago market until spring? Well, the September stats are here, and I was correct to a certain extent. They are definitely all higgledy-piggledy. However, there is some amount of information we can wring out of the numbers if we look closely.

The rents in the downtown area (Zone 1) once again showed improvement, both over where we were 12 months ago and where we were one month ago. However, the market times, while better than they were last year, are a little longer than we saw in August. After all of my talk about how the market slows down in the late summer you'd think we'd see those rent rates drop, but instead we see the change in the number of units rented. Yes, the rents went up, but fewer of them filled, leaving more to coast into October. In August we saw 215 units rent, and in September of 2011 it was pretty close to that same number at 212.

So for Zone 1, this means the agents probably were hoping that the standard seasonal downturn would be offset by the extremely hot rental market that we've seen over the pat 12 months and did not lower their prices in anticipation of the annual 50% drop in demand that occurs as September ends. I'm thinking based on these numbers that the average Zone 1 asking rent on a two bedroom apartment needs to come down by about 10-15%. My bet is that next month we see a much higher market time as many of the units will have remained on the market into October.

Moving out of the luxury market into neighborhoods with trendy names and smaller architecture, the Zone 2 results show a more gradual relaxation but there is no doubt even here that the end of season had an effect on the September numbers. While rents were higher than they were in 2011 by about 3.5% and market times were two days shorter, they actually fell 2.8% from where they were just a month ago in August of 2012.

Market times were consistent, so it looks like the Zone 2 agents have a better ability to anticipate the end of the rental season. I think that downtown/Zone 1 is seeing some Realtors dabbling in rentals when they normally handle sales only. The Zone 1 market has for years been the near-exclusive province of the property management companies with in-house leasing staff. It's only in the past two years that the condo-to-rental market has necessitated that downtown Realtors sidestep into leasing. Many of them probably started doing rentals sometime this year and couldn't predict what was coming as the weather turned colder. By contrast Zone 2 agents (and Zone 3 agents as we'll see) are more practiced in the apartment market and were able to warn their clients. As a result, while the total number of units rented was still a 23% drop over last month, it was pretty consistent with the 2011 performance. Well done, Zone 2!

Oh my goodness what the heck happened in Zone 3? 5.6% lower rents and almost 50% longer market times compared with 2011. A 10% drop in rents since August. The lowest attained rents since January. What happened? The answer lies in what happened at other sizes. Remember, Rent Bacon is a snapshot of 2 bedroom, 2 bath apartments only. Our drop in Zone 3 was absorbed by the larger 3 bedroom, 2 bath apartments.

Renting at an average price of $1615 this year, 3 bedroom apartments in Zone 3 are far more affordable than a 2 bed in any other zone, and not terribly much more expensive than a two bedroom. Renters have noticed this. They only rented eight 3 beds in September of 2011, but this year they rented 21 of them. Almost 300% growth in demand. Coupled with the standard price drops and increased market times of the off-season, this shift in popularity is what caused such disastrous numbers for Zone 3 two bedroom apartments.

Want more Rent Bacon? Here's all of them on one page!