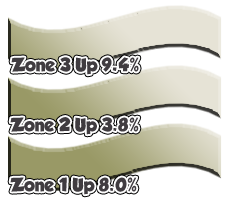 The Offseason is Upon Us!

As I've discussed before, the rental market slows down in Chicago once October 1 passes. Rent Bacon is a year-over-year analysis, and as the quickie image shows, the market is still up as compared to where it was this time last year, but compared with the activity and prices of two months ago we've slowed down considerably. This is to be expected. However, the average rent for a 2 bed/2 bath rental downtown remains firmly stationed above $2500 per month and for the near north area it's sitting pretty over $2000.

The overall market activity has tanked across the board, as anticipated. Zone 1 is down to 162 units in October, compared to a peak of 246 units in July. Zone 2 has fallen from 115 units rented in March to just 59 in October. Even Zone 3, our wild card area, has dropped off from 36 units rented in March to 21 rented in October. This is to a large extent due to deliberate slimming of the market by experienced landlords and agents who have been through this mess before. It has nothing to do with a market rejection of the rent rates. It's simply a seasonal flux.

Rent rates in Zone 1 stayed pretty consistent, with the average price of a 2 bed/2 bath rental slipping only $15 from where they were in September. $2543 is actually the 3rd highest rent average for this zone in 2012. Unfortunately it was achieved at the expense of the market times. While year-over-year we saw improvement on all fronts downtown, when compared with the peaks we reached earlier this year it's obvious that the slowdown is in full effect. In July we saw a 22 day average market time. 3 months later we're at 31 days.

I will be interested to see in coming months if downtown is willing to trade off for a slightly lower rent rather than tip over into a 2 month average vacancy. Worst case scenario, downtown has seen average market times as weak as 70 days in February of 2012, so we know that landlords have dealt with 3 month vacancies before, but after 2 summers of boom times it will be a bitter pill to lower rents. The scenario for the rest of the winter all depends on how well landlords are controlling the flow of fresh inventory to the market downtown. Considering the average rent rate for a 2 bed/2 bath has gone up by $341 in less than two years, one can almost hope for a glut of apartments that drives those prices down a bit. Given the number of A-Level investors controlling the inventory on the downtown market via computer algorithm, though, my guess is that new inventory will be stifled until spring and prices will remain at their current rates or higher.

Zone 2 has also seen a $322 increase in average rent for a 2 bed/2 bath over the past 2 years, but given that they started at a lower price, proportionately that means they're sitting pretty soaking up the overflow from downtown. This area has only slipped $51 from their market peak in June of this year, but the same effect on market times that we saw in Zone 1 is apparent here. The average market time increased by 9 days from September to October this year. In the crazy summer market, tenants were getting forced out of Zone 1 to the benefit of Zone 2. With more room to breathe downtown, Zone 2 was hurting pretty badly, even if it did see a slight improvement over its performance a year prior.

So what about Zone 3? This has been our wild card area all year, reacting to what happens further inwards. October was no different. Rents are pretty far down in Zone 3 compared to the peak of the market - $1357 in October vs $1500 in July. That's only $115 over the worst average rent rate in the past 2 years - a pittance of an increase compared to the other zones. However, October also saw it post its best market times this year, and the best improvement when compared to it's October 2011 position.

So far we're not seeing the same inward motion from Zone 3 to Zone 2 as we saw from Zone 2 to Zone 1. It may happen next month - Zone 3 always takes a little more time to catch up with the rest of the city's activity. However, something tells me that Zone 3 renters are more likely to "move up" into a larger unit than they are to "move in" to a more central zone.

Stats reflect pricing and activity for 2 bedroom, 2 bathroom apartments listed in ConnectMLS as with rented dates during the month of October. Analysis of specific areas is available upon request.