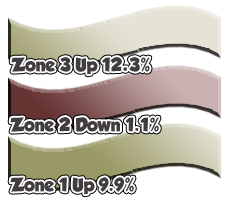 A new weighted average has changed the numbers but not the direction of the trends. We're slowing down, guys.

I've been giving some thought as to how Rent Bacon is calculated, and have made some adjustments. Previously I had been weighting rent and market time equally. To some extent when considering rentals this is valid, especially given that an extra few days at the tipping point between, say, 28 days on the market and 32 days on the market can mean the difference of an entire month's rent. However, the overall weight of market times as a way of judging the Chicago rental market is truly less important than the rent rates obtained. As such I've stopped weighting them equally.

Going forward rents changes will be weighted 3 times more than market time changes when calculating Rent Bacon, but don't fear! I've gone back and adjusted the previous months' charts to reflect this new weighting of the averages.

Well, it was bound to happen. Due to a combination of factors we've started to slow our year over year rent growth here in Chicago. For the first time this year we're seeing rent rates lower than last year in Zone 2 and Zone 3, and only a minimal 3.1% rent increase in Zone 1 - Downtown. Only the shrinking market times are continuing to buoy up Zones 1 and 3 to the point where they are showing positive overall movement.

Zone 1 saw minor growth in rent, and a pretty substantial drop off in market times of 30.3%. I would attribute this to a matter of inventory - we're simply running out of apartments down there. Luxury condo buildings that had made up the lion's share of the Downtown Chicago rental market going back to 2008 are either full or re-entering the for sale market, and with condo communities at their capacity for rented units this inventory will only get less as we move forward.

While we're hitting our head on the ceiling for potential rental stock, we're still seeing growth in the actual units rented compared to earlier months this year: 224 rented units in May compared with 157 in January. This larger sample size means that the high end five-figure rentals will have less of a pull on the overall inventory. However, this month-over-month inventory growth is cyclical, not linear. The activity will slow after October 1 as it does every year.

Additionally, we need to remember that the skyrocketing downtown rental market really took off about 12 months ago. From January 2011 to May of 2011 rents increased 7% in Zone 1. That means that we've seen 10% growth over 17 months, which is still way beyond cost of living and definitely beyond most local salary increases.

The Near North, trendy Zone 2 saw its first drop in average rent rates since I started tracking, with a modest 2.6% relaxation. However, at $1909 we're still a good 11% higher than the salad days of $1722 average rents back in January of 2011. Market times were already at less than a month last year in this area, so their gain of 1 day means very little in terms of cash flow impact.

Again falling inventory numbers year over year indicate to me that we've reached a ceiling in Zone 2 of both potential inventory and maximum attainable rent while we remain in a slow job market and slow economy. During a conversation today with a leasing manager at Chicago rental behemoth Cagan Management we were flinching a bit that their Lakeview & Lincoln Park properties have no planned vacancies until October.

The "budget" neighborhoods of Zone 3 also saw a modest drop in average rent rates, although given the lower numbers of 2 bed/2 bath rentals in this area, a 1.9% drop in rent rates could be within the noise. The market times here saw some wild improvements, though, falling from 93 days in 2011 to 42 days in 2012, as groups priced out of the inner circles of the city snapped up plummy, larger units further outside their normal comfort zones. A 54% improvement in market time is a major influence on cash flow and means greater potential investor interest is due for these previously ignored areas of the city.

So has the rental market peaked? Have we seen the top of these insanely inflated rent rates? I would say, wait and see until September before we make that call. Chicago has annually seen a very tight market in the run up to May 1, and another that anticipates September 1 & October 1 together. I would anticipate slower growth - we may not see 13% year over year in any of our surveys this year, but I don't think we're starting a rapid downhill slide just yet.