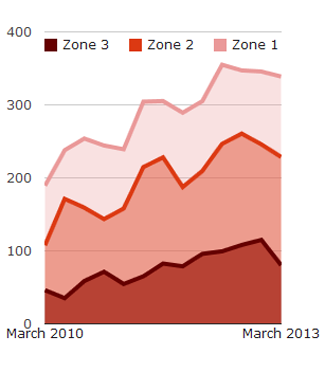 New month, new Rent Bacon. Rent Bacon gauges the change in actual value of apartments in Chicago on a quarterly basis using rental data from the local MLS. The index takes into account the rent rates, market times, and ratio of rented units compared to listed units. This month we’re looking at 2 bedroom, 2 bathroom apartments throughout the city. For more info on how the index is calculated, check out this explanatory post.

Now this is not something obvious from the chart above, but it is quite clear if you compare it against last month’s results for 3 bedroom, 2 bathroom apartments. The index value for 2 beds is considerably higher, peaking over 300 for the smaller units. Does this mean that they’re actually a better value? Yes, absolutely.

While the rent rates for 3 beds are definitely a little higher, the added value comes in the rent-to-list ratios and the market times, which are all massively stronger for the more commonplace 2 bed/2 bath apartments. Cash flow matters to investors. If you’ve got a choice between an apartment with a 40% chance of sitting empty for an extra month or one with a 25% chance, which would you pick? You’d go with the more popular 2 bedroom too.

The market always slows down in the winter. The chart clearly shows an annual dip in value. However, this year the dip has been much more severe. While the index for the two inner zones still increased this quarter as compared to last year, the growth rates were the smallest we’ve seen in 3 years. As for Zone 3, they actually lost value compared with this time last year, mostly due to a bad drop in unit absorption (or, a bad rent-to-list ratio).

Looking forward across this year, I don’t foresee an rent values tumbling in our near future, but there will definitely be some flattening of the skyrocketing prices we’ve seen over the past 2 years. In fact, there will probably be one last upward squeeze in prices as condos for rent transition back into the sales market, forcing their tenants back into a shrunken inventory pool. However, the same demand for less supply will not last forever.

Tenants frustrated by this year’s market will probably turn into buyers over the next 12 months. New rental inventory coming online throughout the city will also alleviate some of the pressure. Rents, once elevated, rarely come down again, but they do flatten, and I foresee some serious flattening ahead as we get into the 2nd and 3rd quarters of 2014.

Observation #3: What about Renewals?

Stories from my comrades in the field tell me that tenants are renewing at a very high rate, with some requesting an additional year up to five months before their current leases expire. The statistics back it up – in zones 1 and 2, fewer apartments were listed this quarter than in 2012. When it comes to cash flow, there’s nothing better than keeping your tenants for another year. No turnover costs, no commission costs, and the rent will probably increase. This means that the values may actually be higher than we see on the surface.