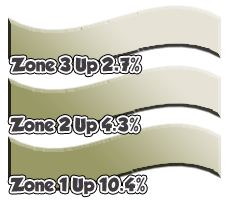 In every area we considered, the rents this year are higher than the rents from 2011 in Chicago.

It's the first Friday of August, so that means it's again time for a snapshot of the Chicago rental market in tasty bacon strip format. Comparing rent rates and market times between June 2012 against June 2011, we're seeing increases again in all three of the zones tracked by StrawStickStone.

As you may recall, last month saw a shift in how Rent Bacon was calculated. Both rent rates and market times are considered in a 3:1 weighted average. This month we hit our six-month mark, and the news continues to be grim for renters and rosy for landlords.

Inventory was actually down in June compared with May, but only by a small amount. Both Downtown (Zone 1) and the Far North/Northwest regions saw lowered activity on the 2 bed/2 bath sector that we use as our benchmark, although the Zone 2 trendy areas saw an increase that more than offsets the losses seen in the other two zones.

Market times, however, improved in Zones 1 & 3, albeit only slightly, and saw almost no change at all in Zone 2. What this indicates to me is that by June of 2011 we were already in a rapidly accelerating market. The pace can't get any faster. The 23-29 day market times seen both years in Zones 1 & 2 mean that the rentals are actually going under contract after one weekend on the market, given how long it takes for a rental to go from off-market to leased. With market times at their absolute limit, the only margin that can move is rent rates.

Zone 1 has seen the average price of a 2 bed/2 bath go fro;m the $2200-2300 range in 2011 to the $2350-2600 range consistently in every month this year. The average increase seen across the six months that I've been running Rent Bacon is 8.6%. Guys, 8.6% is just over one month's rent over the course of a year. Zones 2 & 3 aren't quite so awful, seeing an average increase of 4.5 to 5% across the board compared to last year, but considering that the populations in these areas are far less likely to see pay increases or even employment at all, it's still an awful burden on the average renter. Zone 2's average rent for a 2 bed/2 bath just passed $2000 for the first time. Zone 3's averages are the highest they've been all year.