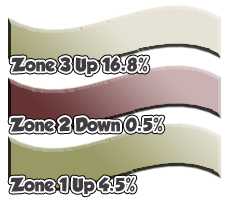 Zone 1 saw much slower growth, Zone 2 saw a slight relaxation in pricing. Zone 3, on the other hand...

First Friday means we're frying up another heap of Rent Bacon. This strangely named monthly series offers the most compact, flavorful summary possible of the Chicago rental market in a bacon-shaped chart. <<< That's the chart. My analysis is below.

My suspicions from last month's report were confirmed by July's numbers. The innermost zones both showed dramatically slowed growth compared to the astronomical increases we saw in the first two quarters of 2012. Zone 2, the near-to-mid north area, saw both lower rents and longer market times compared to July of 2011. However, Zone 3, consisting of the far-north and near south neighborhoods, saw a repeat of June's massive improvement over 2011.

Downtown may well have peaked. With only 3.3% rent growth and no change to the number of rentals on the market I think we may have reached our limit. Rents are still increasing but I do not think we will see a return to the heady 10-14% year over year increases that we saw in the 2nd quarter.

However, the 2 bed/2 bath constraint on downtown may be limiting our numbers. I've taken this to be my benchmark for a "normal" rental, but with rents increasing the first thing people will do is to downsize. This made me wonder if there was some absorption in the 2 bed/1 bath market downtown of those who cannot keep up with the spiraling costs. A quick glance at the numbers for 2 bed/1 baths confirms it - rents for these lesser units increased by 8.9% and the rented inventory increased by 10.7%.

I do think that the downtown market has reached an event horizon. Market time averages simply cannot go much lower without resulting in a disturbing number of the best listings staying online for less than an hour. $2410 per month for a 2 bed means that the average tenant needs to be earning at least $86.4k per year. A repeat of the 13.7% year over year increases that we saw in April would push it very close to the brink of requiring a six figure income for an average apartment. The 3.3% y-o-y rent increase that actually occurred is bad enough for this weak economy's tenant pool.

But what about Zone 2?

This is not the first time in 2012 that Zone 2's bacon strip has been in the red. However, two outside factors should be borne in mind, and here I go again with my typical style of giving you stats and then telling you to ignore them.

July of 2011 was the first time that the average cost of a 2 bed/2 bath exceeded $2000 in Zone 2. In fact, Zone 2 saw a 4.8% increase month over month between June and July of 2011. That's pretty major. The other thing to remember is that the negative showing results entirely from a market time that's only one day longer in 2012 than it was in 2011. Percentages are funny creatures that way.

Besides, while I think a lot of the Zone 1 folks overflowed down a notch into the 2 bed/1 bath units, I think the Zone 3 folks migrated outwards to Zone 3.

Zone 3 rents have increased 16% this year, going from $1292 in January for a 2 bed/2 bath to $1500 in July. That's bad news for an area that normally caters to the least affluent members of the Chicago north side population. July 2012 saw a 10.7% increase in rents over July 2011, and a massive 35.1% improvement in market time. At the beginning of the year someone earning $46.5k per year could afford to comfortably rent up there. Now they have to be clearing $54k, or $27 per hour, full time, year round. Your average Chicago housekeeper earns about $11 an hour.[1]Indeed.com A couple of them would not be able to comfortably afford an average 2 bed/2 bath rental in an area like Rogers Park.

Stats reflect pricing and activity for 2 bedroom, 2 bathroom apartments listed in ConnectMLS as with rented dates during the month of July. Analysis of specific areas is available upon request.