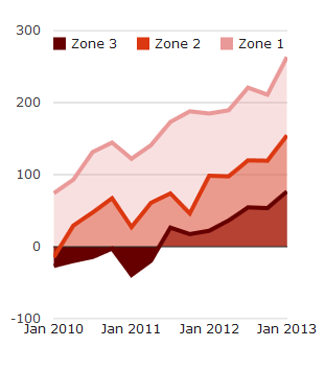 Welcome to the new Rent Bacon. As I explained last month, I've redesigned the Rent Bacon concept to be more comprehensive and more recent. I've spent quite some time over the past month thinking about the goals for this monthly series and I've got some really exciting results for you.

Thirdly, and this is most exciting, the index is actually useful. The new Rent Bacon Index is a rough estimate for how much more the same apartment is worth this year over last year. This means that if you're a landlord, you can use it to figure out how much to increase rents this year. If you're a tenant, you can figure out how much more or less you can expect to pay to move to the same size apartment in the same area.

The new Rent Bacon graphic shows the past 13 quarters of data, so people who last moved a while ago can get a solid idea of what's happened to the market while they've stayed in the same place. It's still tinted to look nice and bacony.

The numbers on the left are the index values. This is not a rent rate. It's calculated based on my own personal formula. It indicates an estimate of how a particular zone is trending in comparison to the fair market rents established by HUD.

To use the graphic, select your zone and move in date. Then find your zone and move out date. The change in the line indicates the change in value over the duration of the lease so far. For example, if a tenant moved in to Zone 2 in January of 2010 and move out in 2013, the rent index has gone up by about 140 points. That tenant can expect to pay $140 more per month to move in to the same style and size of apartment as the one they currently occupy.

I wanted some means of "scoring" apartments, based on constants for "acceptable" rentals in the area. I wanted it to take into account rents, market time, and rent to list ratios; that is, how many units rented vs how many came on the market. I'm going to explain the whole formula here so you can try this at home. If you don't feel like getting too much into the math, suffice to say that it's based on HUD's fair market rent rates, a market time of 8 weeks, and two apartments renting for every 3 that come on the market.

The US Department of Housing and Urban Development sets fair market rent rate for the Chicago area each year. I use these numbers as my minimum "acceptable" rent rates. You can read more about it and see the 2013 rates here. Since it's generally consistent, I am using these figures as my constants. Each year is calculated based on its respective FMRs: the 2011 numbers use the 2011 FMRs, the 2012 numbers use the 2012 FMRs, etc. I take the average rent rate in the MLS for the past 3 months of data. For every $50 over FMR, another 10 points is added to the score.

For the minimum "acceptable" market time, I chose a constant of 60 days. I chose this because a two month vacancy is about the most a landlord can handle in a year and still see income from their apartment. (I figure that they'll spend two or three additional months income to turnover costs and commissions.) If the average market time for the past 3 months is less than 8 weeks, this indicates high demand and a higher score. If the average market time exceeds 8 weeks, this indicates low demand and a lower score. The score is adjusted in the proper direction by 5 points per week.

The rent to list ratio was not considered in the prior version of Rent Bacon, and that bothered me. After all, an average rent of $2000 is totally invalid if only one out of four units on the market is renting. In fact, I consider the rent to list ratio to be more critical than the market times, especially in a fast market like Chicago. Long market times can be fixed with small price adjustments. Overflowing inventory needs far bigger price cuts to get moving. I used a constant of 2:3 as a baseline for an acceptable rent to list ratio. Therefore, for index purposes I calculate the ratio as a percentage and then subtract 2/3.

Using this formula makes for a system that will allow us to effectively compare the changes between the three zones.

Boy, am I glad I started paying attention to the rent to list ratio! What a great month to start. This is the first time in 3 years that the number of units rented has exceeded or equalled the number of units that came onto the market. For this to happen in the normally slow winter quarter is unheard of and totally skewers my predictions for this year. Less new inventory coming on the market means more competition for the units that remain. More competition means higher rents. I had thought we'd slow down this year but if the past 3 months are any indicator, we're going to be skyrocketing.

This is the first time we've looked at one bedrooms at all for Rent Bacon. The average prices are ranging from $950 in the outlying areas to $1750 downtown. An $800 spread - that's a 184% difference - in one city is pretty impressive. We're seeing solid 29-35 day market times across the board too. Considering that just two years ago we were seeing 45-80 days as the norm, that's a massive improvement.

The economy also is a factor. People are finding jobs and emerging from credit problems that hit with the rotten 2007-2008 economy and can afford to move. More importantly, they can afford to break up, which they haven't been able to do for a long time. These are one bedrooms - apartments for the newly single. There's a whole lot of dumping going on.

Finally, we have to consider the source data - the MLS. Realtor-represented apartments. Chicago has long relied on the 15 hour license apartment locator services, but it is learning to take rental-focused Realtors seriously, too. Meanwhile, the Realtors who had previously though rentals to be beneath them are simultaneously learning that they're a great secondary line of income.

Let me know what you think of the new version. I hope it's more useful than the prior thing. I'll be back on Wednesday with a return to the eviction series. See you then!