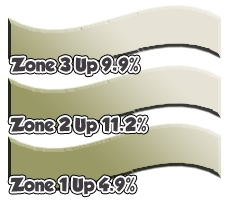 Color Me Surprised. Kind of.

After several months in a row of the numbers telling me that Chicago's apartment market is peaking, today's installment of Rent Bacon is kind of surprising. While the downtown market remains pushed to its absolute limit, the outlying neighborhoods showed very strong growth just when I thought they were at the breaking point.

However, this sudden surge should not be mistaken for a permanent effect. August 2012 was now fully 2 months ago and encompassed the traditionally strong September 1 rental market. (Unfortunately I cannot really run Rent Bacon until at least a month has passed, as Realtors can be sluggish in marking their listings as rented.) More telling are last week's quarter over quarter stats, which showed an overall slowing of the pace across the board. If Chicago continues to show upward motion in next month's installment I may change my tune, but for now I'm still thinking we're maxed out citywide. Even 4.9% growth - the lowest seen for any zone in August - is far in excess of standard inflation and not sustainable in the long term, especially in a slow economy.

Zone 3's market times have dropped from a 2012 peak of 62 days to 25 days, putting them right on track with the rest of the neighborhoods we've tracked. Remember that an average market time of 25 days means an actual market time of less than a week for the best units, given that the time to get from "off the market" to "rented" artificially increases the market time by about a week.

Zone 3 landlords are more reluctant to bump up their prices, showing consistently smaller increases year over year than their downtown and near north neighbors. While this has improved cash flow for these landlords by an incredible amount by shortening market times, it has also had the side benefit of keeping at least one section of Chicago affordable.

The total number of units on the market in all zones has remained remarkably consistent from year to year, rarely varying by more than 10 units rented. This tells me that the MLS has largely stopped adding new "accidental landlord" inventory and is instead recycling the same listings year after year. However, I would be remiss to not mention that all three zones saw a very slight decrease in total rental inventory compared with last year. Some units have sold out of the rental market. Other buildings are at their limit. A few landlords probably chose to go it alone without agent assistance this year.

The average price for a 2 bedroom, 2 bathroom rental downtown is nearly $2500. It's easy when looking at these numbers to get caught up in the trends and ignore the face value numbers. The minimum was $1000, the maximum was $5000. If all of those tenants stay for 12 months, the downtown area generated $6,436,260 in rent just for 2 bed, 2 bath units in one month, just from the MLS alone!

Stats reflect pricing and activity for 2 bedroom, 2 bathroom apartments listed in ConnectMLS as with rented dates during the month of July. Analysis of specific areas is available upon request.