Don't get me wrong - I'm all for helping out the less fortunate. EM:HE, though, was a frosting of generosity plastered thickly onto a cake of "let's sell lots of furniture." 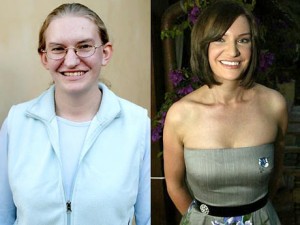 The original did stuff like this. (Before & After, same person.)

Let's start with how the premise of the show's format has evolved over time. At first when the show was just "Extreme Makeover" in the early 2000's, the disease of the week was ugliness and it was cured by plastic surgery and new clothes. Then as the economy tanked the problems were all related to poverty and unforeseen medical problems - see also: ABC's wish list for the most sensationalistic diseases to feature on EM:HE as uncovered by the Smoking Gun. The cure was destroying and rebuilding homes with fabulous interior design, interspersed with appearances from B-level celebs. "EM:HE" ran for 9 years on this idea, through the rise and fall of the late 2000's real estate boom/bust cycle.

Now a more marketable problem has appeared, and the show has been relaunched as "Extreme Makeover: Weight Loss Edition" to stay au courant. The advertising dollars available from Sears and Home Depot can't hold a candle to the money offered by the juggernaut weight loss industry, so ABC's "moved that bus" permanently and replaced it with some wide loads of the human variety.

So what does this mean? First of all it means to me that the powers that be at ABC/Disney equated giving someone plastic surgery on air with knocking someone's house down in the "emotional impact" department. The public outcry against the original "Extreme Makeover" and its concurrent competitor "The Swan" meant that most normal people don't view it the same way, and I'm grateful for this little ray of hope for humanity's sense of taste. It's okay to say someone's house would be better off torn down and replaced. It's okay to take pity on poor people with strange diseases and rally the community around them. It is NOT okay to say that someone is so ugly that they can only be "fixed" with rhinoplasty.

But seriously, folks, for the sake of spectacle we're kind of OK with tearing down an entire house, as long as it belongs to someone else who's got nowhere to go but up. The taboo isn't as severe. It's definitely there, or the show would not have succeeded so thoroughly. But it is a gentle enough taboo to be resistant to most of the outrage that doomed the original version.

Who deserves a free house? 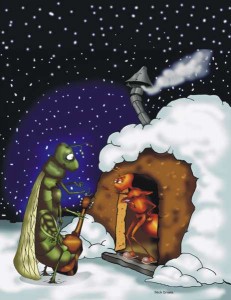 Poor guy. Doesn't have that American dedication to his job. (Artist unknown.)

The public's endorsement of EM:HE tells us that houses are less valuable than noses. The comparable success or failure of the weight loss version will tell us whether America places greater value on housing or longevity. But there's an additional sociological "tell" in the public's interpretation of who deserves an enormous, professionally decorated, free house. Wikipedia cites at least three cases of community backlash when the families in question were deemed insufficiently poor, ailing or otherwise pathetic to be deserving of the makeover treatment. According to a message board first-hand account, ABC gave regular counseling to its chosen families as the backlash was common.

There is, I think a need for revenge inherent in the American psyche that loves seeing the poorest underdog suddenly catapulted to the top, and the wealthy thrown down in the dirt. When a good-hearted poor person who's taken more than their fair share of hardship is suddenly showered with gifts, we feel generous and warm and perhaps live vicariously through their "king for a day" moments. We're glad that the guy who has never been able to get a break in life has finally gotten a big one. Meanwhile, when former celebrities wind up bankrupt and living in trailers we gape and ogle and sadly shake our heads while feeling internally smug. In our minds they're finally getting a taste of the difficult life that most of us normal people go through every day.

This Robin Hood aesthetic is shot through every element of our culture and nowhere more prominent than in this 2012 political environment. The income brackets assigned the left (poor/humanitarian) and right (rich/social darwinist) wings are assumed to be true, even though over half of the top 20 richest folk in the country are currently registered Democrats and therefore theoretically "leftists." Even, so, both parties are claiming to some extent that they can bring more breaks to the poor & unemployed, while accusing each other of favoring the 1%.

But regardless of how we feel about wealth, America seems to have a universal loathing for lazy "grasshoppers." Some of us want the grasshopper to beg for mercy, others want him dead, but everyone wants to see him suffer. When someone is deemed worthy of the EM:HE treatment by a TV producer, what prompts the neighbors feel so strongly to the contrary that they push the recipients into counseling? Are there levels of suffering that would merit, say, a new car or a hat passed in church but not a visit from Ty Pennington? When is a family's misfortune so severe that our pity overrides our jealousy? When is it enough suffering to deserve a house?

To recap for those of you just tuning in, this means that houses are less valuable than noses, but houses (at least, luxurious ones) are worth enough that only those who have worked hardest and suffered the most bad luck deserve to receive them as gifts. If that wasn't complicated enough, we do still need to think about the reaction in the community when one of these families chooses to sell their brand new, shiny custom-built luxury makeover house.

Did you just feel a little twinge inside at that thought? Did the words "ungrateful" or "greedy" or anything comparably offended float through your head? Yeah. Let's talk about that for a moment. 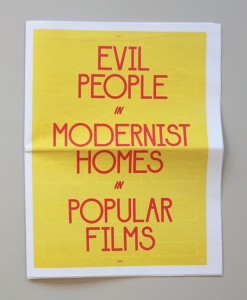 Evil People in Modernist Homes in Popular Films. A zine by Benjamin Critton. (or what you turn into when you sell your Makeover house.)

One of the reasons most Realtors will tell you that buying is better than renting is that you can do whatever you want to with a house that you own. Property ownership brings with it the right to sell, lease or subdivide the property (subject to the laws of the land like zoning and the like). It also brings with it the tacit expectation, even in this 2012 real estate climate, that you will turn a profit when you sell your home. I go through all kinds of mental gymnastics figuring out how to explain to you, the home seller, why you will not be able to turn a profit when you sell in this slow market.

When your average Joe or Jill sells their home for a profit they feel like they've earned it. After all, they scrimped and saved to buy the property, and they worked hard to pay their mortgage and keep the house in good shape, and now their hard work has paid off with a substantial return on their investment. And the EM:HE families? Let's not forget that they also bought the land that the house stands on at some point in their past. And let's not forget the hard work and suffering that they put into the old house before Ty & crew tore it down. And while we're at it, let's not forget that many of these new, enormous post-makeover houses bring with them elevated utility bills, property taxes and maintenance costs.

There is a term in real estate valuation called 'highest and best use.' It's invoked when trying to determine the best way to market a piece of vacant land - should it be used for houses? Shops? What kind of shops? Maybe a church or a school? The most profitable and utilitarian usage will be deemed "highest and best" and get the focus. It's a sensible business practice. If a family decides that the highest and best use of their home is in liquidating its value, then by all means let them go for it.

So, why do we feel like it's such a distasteful move? A Google search of "extreme makeover family sold house" yields a bushel of stories about families who were forced to sell their gifted homes due to increased taxes & expenses after the contractually-obligated 3 year stay ran out. Others sold because they felt unwelcome among their scornful neighbors. Regardless of the reason, though, they leave their homes behind and it leaves us feeling empty as the actual buildings. 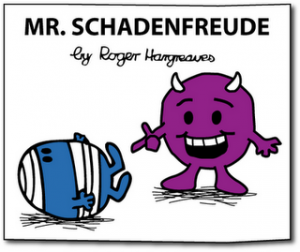 Can you say schadenfreude, boys & girls?

It's my belief that the prominent coverage of these sales has a threefold cultural reading. One side is the anti-government angle. Anything that's good and pure is eventually ruined by taxes and the man's corporate greed. Most of us can empathize with this sad story, even if the empathy comes with some schadenfreude. There's also a cautionary tale that the poor when dropped into a rich man's world simply cannot rise to the challenge and survive within it. And finally there's this undercurrent that turning a gift into a commodity somehow taints the family, even though the majority of us would get pretty indignant if you told us we no longer had the right to sell our own homes.

Beyond what we feel about the family, what does this say about our view of a profitable home sale? Are we seeing profit as something reserved only for those who legitimately bought or built what they're selling? Or are we maybe seeing profit as something dirty that will sully the recipient family to the point where we can no longer feel pity at their situation nor joy for their subsequent happiness? Maybe profit is what tips the balance back from pity to jealousy.

So, here's what this show says to me:

(PS: I'm starting a weekend links feature tomorrow. If you're interested in having me hand pick your reading material,  come on by tomorrow (Saturday) at 10am!)