Others are harmless gestures. 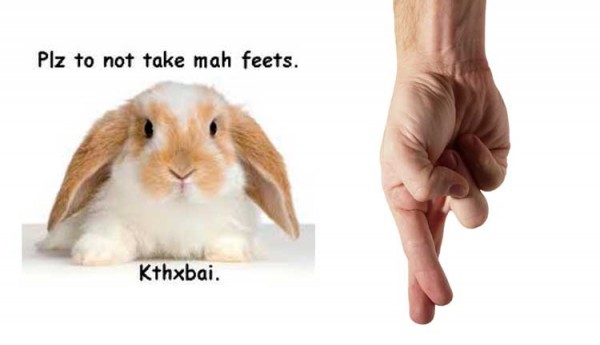 Others are potentially embarrassing.

If you're going to get a tattoo of Asian characters, make sure you know what they mean.

And then there are those that seek to thwart the power of "the man" through use of equally incomprehensible legal terminology.

Of course, some of us will be quick to run to Snopes to prove our misguided friends wrong. And then they, in return, will enjoy sweet justice when they get to turn the tables on us a few months later. Some smug know-it-all nerds even go so far as to write trivia quizzes about our fondness for magic words. So why do we keep falling for these tricks?

It's probably due to a combination of causes. We're superstitious. We don't know what those with power over us could do, but we're certain it isn't good. We want to protect our belongings. We're afraid of those who are stronger than us. We're certain that the ancients or the lawyers know more than we do. We gravitate towards comfortable rituals, or fall prey to the gambler's fallacy. And wouldn't it be cool if we meek folks could further our agenda of inheriting the earth by something as simple as a gesture or a copy-pasted status?

Or maybe we do it because sometimes it works. 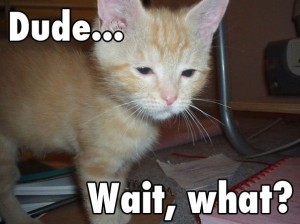 I'm going to take a little detour to tell you a couple of stories.

Let's say that Mr. Rosen and Mr. Jefferson live next door to each other. Mr. Jefferson puts up a fence to keep his dog and kids in the yard. Unbeknownst to either of the gentlemen, Mr. Jefferson's fence is about 3 feet over the border of Mr. Rosen's property. About fifteen years later, Mr. Rosen sells his house to Miss Avers. When Miss Avers obtains the plat of survey before she buys the house, her attorney brings to her attention the issue of Mr. Jefferson's fence. She puts it on her to-do list to address after she moves in.

Five years down the road, the Avers family decides they want to start a compost pile their yard, but have run out of space to do so. Miss Avers speaks with Mr. Jefferson about the matter, but as Mr. Jefferson has planted a nice flowerbed in the three foot overlap he is not willing to give up the land. They take the matter to court. Unfortunately for Miss Avers, the land now belongs to Mr. Jefferson!

Meanwhile, the Chavez family lives in Oregon, but buys a plot of about 80 acres of land in downstate Illinois. They mean to eventually build a summer home. They head out there occasionally but never really get around to building anything. In the subsequent years, the Mortensons buy a 150 acre plot immediately next to the Chavez land. They get to clearing the area and wind up clearing much of both plots. As time goes by, they build across the entire expanse of land. Twenty five years later, the Chavez children are willed the property by their parents. They go to finally build that house and discover that they have lost the property to the Mortensons. 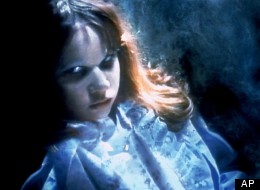 ... Not that kind of possession.

What has occurred to both Miss Avers and the Chavez children is something called adverse possession, or as it's more commonly known, "squatter's rights." In many states, if someone occupies another person's property for a substantial amount of time under certain conditions, they gain the right to claim title to the property. In most cases, the occupation must be:

Some states require more than these, but the five stipulations above are pretty much universal.

It takes a long time for a squatter to be able to acquire property through adverse possession in Illinois - the minimum time for all five criteria to be in place is twenty years before the courts will consider a squatter as a claimant to title. However, for once, magic words work, because in this case some simple signage can prevent the issue from ever coming up.

Legal contracts generally require both parties to sign off on them before they take effect. Social contracts, on the other hand, can go one way and still be effective. "Please" is a very common one-way social contract. It's short for "If it pleases you." Anyone who follows a command seasoned with the word "please" is tacitly agreeing to the social contract that it does, in fact, please them. (Imagine that, mom & dad were right. Please actually is a magic word.)

According to Illinois law, there's another one-way, legally binding contract established by simply posting of "No Trespassing" signs every 199 feet along the border of your property. Chapter & verse can be found in the code of Civil Procedure, specifically 735 ILCS 5/13-122. It reads in part:

No use of any land by any person or by the public generally, no matter how long continued, shall ever ripen into an easement by prescription, or be deemed to be an implied dedication, or be deemed to give rise to any other right, customary or otherwise, to be on, or to engage in activities on, such land, if the owner of such property for a continuous period posts at each entrance to the property or at intervals of not more than 200 feet along the boundary a sign reading substantially as follows: "Right of access by permission, and subject to control of owner".

For once, posting notice actually works to keep you safe! Even if those squatters sit on your land for 20 years and a day, if you've got those signs up you're safe from them being able to invoke the adverse possession laws.

NOTE. This only applies in Illinois, and if it's after November 28, 2012 it may not even apply there. I'm not a lawyer. If I catch you using this information to sue anyone I will personally come over there and kick your ass. Talk with a real lawyer before you do anything pertaining to real estate title, accusing people of trespassing, or other things that could cause you to end up in a courtroom.

So maybe a fine point of Illinois real estate law is the grain of truth that keeps people believing in such nonsense like good luck charms and lawyerly status updates on social media websites. If this is the inevitable exception that proves the rule of such things being futile efforts, then mea culpa for bringing it up and giving fuel for the fires of heedless trend-followers.

But here's my point: you can copy/paste a status update on Facebook or you can go ahead and read the proposed changes Terms of Service and give feedback. You can hope that entrapment rules will protect you instead of avoiding illegal activity in the first place. You can cross your fingers and tell a lie, or just take a deep breath and tell the truth. In every case, there's a much more difficult alternative to our talismans. This is also the case with adverse possession.

Yes, those "No Trespassing" signs will protect you. However, it's far more beneficial for your investment and the community that surrounds it if you aren't completely absentee from your land for twenty whole years. Better to go visit every couple of years and take immediate action against potential squatters at that time than to even risk losing it through fine points of common law.

Can you think of other examples where our society chooses to use magic words to protect themselves from the unknown? Have you dealt with a "squatters' rights" situation? Share with us in the comments!

PS: If you liked my magic words trivia quiz, you might also enjoy this one about cool stuff hidden underneath Chicago.