Home » All Entries » Landlords in Distress 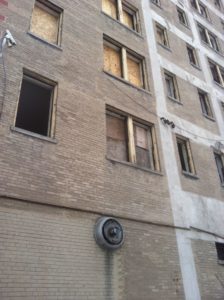 This boarded up foreclosure in West Garfield Park probably meant more evictions than a week of landlord-tenant cases at the county courthouse. (Photo by Garin Flowers/ Medill News)

A few months ago I did a series of articles on the statistics of Chicago Evictions. However, those articles focused only on tenants with past due balances, omitting the other primary source of evictions. It isn't always the tenant who falls behind. A landlord in debt to her mortgage lender can put every tenant in her building at risk of eviction if she falls behind on her loan payments. Today I'm investigating landlords to see if there's any specific risk profile that is a worst-case-scenario for foreclosure, and if landlords are any better than their tenants at making payments on time.

The answers, if you're curious, are Yes and No.

For today's article I was looking at a combination of Cook County tax records, which are nicely searchable based on multiple factors through the MRED LLC's "Realist" search application. This is not restricted to MLS-listed properties. The data is pulled straight from the Cook County Assessor and Recorder of Deeds. Realist just provides the fastest means of access I can get my hands on for doing mashups like this.

I searched for apartment buildings in Chicago that have changed hands within the past 15 years. I broke down the search into buildings with 2-3 units, and buildings with 4-6 units. I ignored anything larger as the bigger buildings are subject to far different criteria, financing and ownership arrangements. I also ignored mixed-use buildings - for example, those with a storefront downstairs and 3 apartments above - as it's almost impossible to winnow out which mixed-use buildings actually have residential apartments.

For the purposes of quick & dirty analysis I have not checked for properties that changed hands multiple times across the 15 years that I surveyed. While the app would allow it, there would be little point, as given the subject matter the 2nd transfer of title would likely be from the landlord to their bank!

Lastly, I was unable to include single family homes with illegal garden apartments, as they're, well, illegal. I could only use properties that are defined as apartment buildings by the Cook County Assessor. There are indubitably large numbers of illegal gardens for rent in Chicago, and certainly many homeowners rely on the income from renting them out in order to pay their mortgages. I can't count them though.

If you remember back to the eviction survey, I discovered that about 5% of all leases in Chicago wind up in eviction court each year. In today's study I learned that about 4% of landlords have been recipients of lis pendens filings over the past 12 months. I also learned that the properties purchased between five and ten years ago are at the highest risk for being in trouble now. Check out the table of Chicago foreclosed apartment buildings below to see what I mean.

I can't really say that landlords do much better than their tenants at paying reliably.

In fact, it was a little too consistent between the different sizes of buildings, so I thought about how I could break it down further. There is a common bit of leasing dogma stating that owner-occupied buildings are generally a lower risk for tenants looking to avoid foreclosure. After all, if the bank forecloses on an owner-occupied building the landlord has to suffer right along with her tenants. I naturally decided to see if this was true.


We have our winner! The averages are all pretty consistent with the global averages, with one glaring exception. 2-3 unit buildings purchased between 2002 and 2007 with remote landlords have a much higher than normal risk of foreclosure. A 9% distress rate means that one out of every 11 landlords who bought in during that era has a lis pendens on file. Pretty nasty.

Also interesting is the owner occupancy shift. Both sizes of buildings see more owners moving in as time passes. However, the shift towards owner-occupancy over time is far more drastic in the two and three unit buildings.

Given infinite time and access to county tax records I would like to hone this research to remove some of the flaws that I mentioned above. I want to roll back the viewpoint in five year increments. This would show if the risk is related to the predatory lending problems of the 2002-2007 market or if landlords consistently fail out more after 5-10 years. I'd surmise that it's a combination of both.

I'd also like to do a little food chain analysis and see how many landlords who evict their tenants for non-payment wind up losing their properties to foreclosure. It seems a sad, but logical progression. (Or maybe a happy one if you're the evicted tenant of a deadbeat landlord.) No rent income means no cash to pay the mortgage. I probably don't have to do the stat checking to prove that one, though.

Finally I would like to see what the CAP rates were on those foreclosed properties when they changed hands, but this would be so labor intensive given my current tools that it's a regrettable impossibility for the foreseeable future.