The StrawStickStone Field Guide to Chicago Apartments series started a few weeks ago with a guide to identifying, tracking and handling garden apartments when encountered on your apartment hunt. Today we're focusing on the coach house, another excellent and unique choice if approached with due caution.

Like many members of the animal kingdom, the Chicago coach house is a master of camouflage. This unique specimen of rental hides in back yards behind larger buildings, invisible from the street. Unique to Chicago and desperately endangered due to shrinking habitat and restrictive zoning regulations, the elusive and wily coach house has a storied history, a valuable place in the Chicago landscape, and a high value to privacy-seekers, mothers-in-law and garage bands citywide.

The coach house (apartmentus hippodomus) is seen only in Chicago. Outsiders will rarely hear of them and newcomers to town can go for years before first encoutering these shy, lumbering pieces of architecture. Originally created as homes for horse & buggy downstairs and carriage driver upstairs, they are most commonly found in longstanding, old-school residential neighborhoods outside of the skyscraper districts. As the construction of new ones has been banned in Chicago since 1957, they are predominantly found in older neighborhoods that haven't seen a lot of conversion, tear downs and foreclosure blight.

Coach houses exist as secondary, separate structures that share a lot with another residential building. As such, they're more easily spotted from alleyways than from the street.

The growing need for parking has meant the end of many coach houses. Their existence outside the codes of the city inspectors and their "grandfathered" status means that many owners have been unwilling to take on the risks of renting them out. Much like Joni Mitchell sang about in decades past, they opt to tear them down and build parking areas instead. This is a downright shame, in my opinion, as city regulations prohibit building any more of them. Once they're gone, they are gone for good.

As freestanding structures in a city of multiple unit buildings, these homes stand out as unique and attract those who want something a little different from the norm. They are not trendy and certainly not updated - the youngest of them is over sixty years old - but their existence on the fringes of the standard city lots and the fringes of the standard city laws gives them a certain caché.

These gentle giants are frequently the largest of the units on a lot if they're undivided. They offer quiet seclusion and an added element of scrutiny for any potential visitors. In many situations, the owner of the property lives in front, so they're also desirable for those who like have their landlord close by but not immediately above or below them. 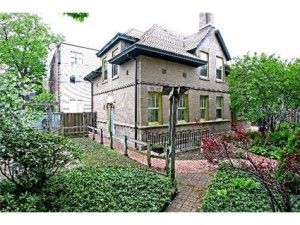 They can also be really cute.

Built as servant's quarters, they have subsequently lost their lower-class stigma. They're often priced slightly higher than their cousins in multi-unit buildings due to their uniqueness and the privacy that they offer, but don't quite hit the same high prices as actual single-family-homes due to their age and their questionable legal status. When separated from the buildings in the front and sold off as condominiums they command comparable prices to any other condo. Out in the suburbs, coach houses and the land they sit on can be parceled out into separate lots and some command astronomically high prices on the sales market.

Conservation status: Extinct in the Wild

The coach house is a hybrid in many ways. It is a combination of single-family home and garage, created in a time when multiple levels of society shared living spaces as servant & master rather than landlord & tenant. As is the case with many hybrid creatures, they cannot reproduce and their time is now past.

Chicago banned the creation of more than one residential building per lot in 1957. A coach house by nature is a secondary freestanding residential building on the same lot behind another home, so they simply cannot make any more. They can renovate and rehabiltate them, they can parcel the lots apart and even sell the existing coach houses as separate condos with PINs of their own, but they cannot make new ones.

While architects see a potential future for new coach houses as useful to the work-at-home entrepreneur, their attempts to create new ones have been few and far between and have necessitated enormous rezoning efforts for their approval.

Traits to Watch for 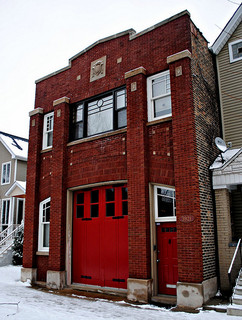 This converted firehouse on Ravenswood in Lakeview was once owned by the Fire Insurance Patrol. Find out more about it at Forgotten Chicago. Photo by Cragin Spring.

Converted Fire Station (A. hippodomus flagranti) - also started as a space to house vehicles, but in this case they were fire trucks, not personal carriages. While these also have the same "repurposed space" thing going on, they are usually the only building on the lot. Many will keep a large panel in the area where the old fire truck doors used to stand as a tip of the hat to the original purpose of the building. These are rarely available as rentals. Fireman pole optional, but recommended as an accessory.

Servant's quarters (A. majordomus) - Also designed to house servants in the employ of the property owners, but within the same building. Servant's quarters will have their own separate space with locking door, and some will have their own private kitchens. However, they do not usually have separate means of egress. You would need to walk through the main house to access them.

Multi-unit coach house (A. hippodomus schizophreni) In some cases, larger coach houses may be split into multiple apartments. Some have up to four units inside. Given that coach houses cannot be expanded per city law, divided coach house units will be pretty darn tiny. Also, given the construction techniques of the 1871-1957 era, noise insulation is not the greatest.

If you spot a particularly fine specimen of coach house during your rental search, please share it with us! They are a unique, Chicago-specific vanishing breed.