It’s been a while since we pulled out the old Field Guide for a humorous look at some of the different types of Chicago apartments. Last summer I gave you an overview of garden apartments and coach houses. Today we’re going to look at another common species of apartment with many quirks: the studio. As the economy starts to recover, many renters who have paired up with roommates through the recession will be able to move out on their own again. Studios, designed for single occupants, will be their next logical stop.

Unlike the previous two species we studied in the Field Guide, the studio apartment (apartmentus minisculus ecubiculus) cannot be found throughout Chicago. In fact, their territory is quite constricted. Studios can only be spotted in areas that currently attract large numbers of single residents, or in areas that attracted them in the past. They tend to flock together in high rise buildings along the lakefront and close to major transit hubs. Their slow appreciation makes them of little interest to condo developers. The ones that exist inland are usually converted from former hotels or clustered around college campuses and hospitals.

Much like certain species in the wild, studios are herd apartments that exist only in large groups. They need a large community and sufficient building square footage where they (and their occupants) can socialize. A building really needs to have at least 15 units before it’s economically worthwhile to devote space to studios.

A. minisculus ecubiculus is a master of disguise, taking many different forms throughout the city. Available space can vary from 200 to over 700 square feet, and room layouts can be more varied than you’d expect. However, the clever apartment hunter will be able to identify it using a simple test. If the sleeping area has no door, it’s a studio. 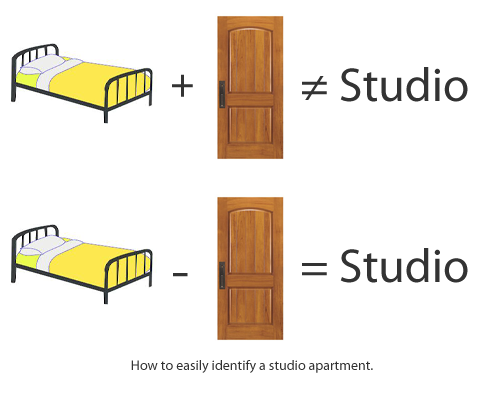 How to spot a studio apartment in the wild.

Other rooms may have doors. There may be a bathroom, a separate kitchen, even a dining room. But if it has no dedicated sleeping area with a door, it’s a studio. Some areas of the world specify that a studio has a separate kitchen, reserving the word “efficiency” for single-room apartments. In Chicago the term “efficiency” has fallen into disuse. “Studio” is used around here to refer to any small apartment without a bedroom.

Studios attract anyone who wants to live alone in a budget-friendly way. They attract everyone from students and first-time renters to retirees and executives from the far suburbs who need an in-town crash pad to minimize their weekday commute. As apartments go, they’re generally the cheapest units available in any given neighborhood due to their compact size. However, they are designed to be used by one person at a time, so for families and couples they’re pretty much out of the question. Many landlords will limit the maximum occupancy for a studio to one adult and one infant.

From an investor’s perspective, studios can be great for your cash flow but they are not recommended for first-time landlords. They turn over 2-3 times more frequently than larger apartments, and attract a generally younger population with less experience in independent living. This species of apartment requires more attention and will incur higher overhead, but as the illustration below will demonstrate, the payoff may be worth it. 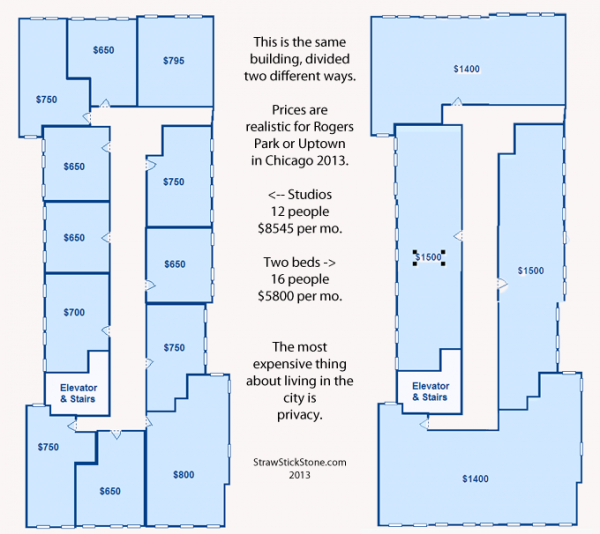 Top down view of the same building, split up two different ways.

Of course, smart renters will realize from the same diagram that choosing to live with roommates is definitely the more cost effective route.

There will never be a shortage of studios in the Chicago rental market. However, due to their restricted habitat they may be scarce on the ground in certain neighborhoods. Like many herd animals, they can be elusive and difficult to spot unless you know a few tricks.

The easternmost areas of the city are usually their traditional hunting grounds. Renters looking to hunt down a lone studio in, say, Lincoln Square, Logan Square or Pilsen will have a much harder time. Additionally, their low price point makes them unlikely to appear in the MLS outside of the Loop and its immediate neighboring districts. The accidental landlords who tend to use Realtors and the MLS to list their apartments are not likely to have a lot of studios on hand.

As much as it pains me as a Realtor to say this, renters seeking studios in the outlying wards will want to go direct to the larger property management companies or the locator services for the best selection of studios. 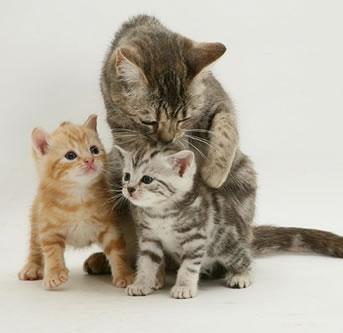 Like other miniature versions of things, studio apartments require just as much work and preparation as larger versions. (Or maybe this whole article is an excuse for me to post photos of kittens.) 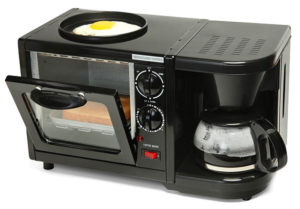 Convertible/Junior 1-bedroom. (A. minisculus dysmorphia) This is a studio with a separate area for the bed. The sleeping area may be partially partitioned with a half wall or curtain, or it could be around the corner from the rest of the living space. However, like all studios, it does not have a bedroom with a door. The term “junior one bedroom” used to refer to one bedroom apartments without separate dining rooms. However, due to online search restrictions it has been reclaimed in the Chicago real estate industry to refer to a glorified studio.

Single room occupancy. (A. minisculus elavatio) The much maligned SRO has come to be known of late as the epitome of squalor. However, the term “single room occupancy” (or “bedsits” as they’re known in the UK) simply refers to a small long-term residence which shares a bathroom and kitchen with other units in the same facility. Some may have kitchenettes, half bathrooms or even full bathrooms, but others are just a sleeping room. Some don’t even have walls to separate the individual sleeping quarters, but instead are partitioned by chicken netting or corrugated metal. Unlike regular studios, SROs are highly endangered in Chicago. Their existence as the least expensive and least restrictive residences in the city have made many of them a haven of last resort for the destitute and needy. However, as they offer some amount of privacy and the right to a long-term permanent address in exchange for low rents, they’re a very necessary step up from shelters.

Not all SROs are dingy, either. For example, the Schiff Residences, located in the area that was formerly occupied by the Cabrini-Green projects, were designed by architectural superstar Helmut Jahn in 2006. They have a LEED Silver certification and provide support services for the residents. While most SROs can’t offer such a lofty resume, a few are trying to preserve the species for the next generations.

Have you spotted a unique or particularly adorable specimen of studio apartment in the wild? Share it with us in the comments! I’ll be back on Wednesday with a rental site review of Domu.com.