Home » All Entries » Cook Eviction Stats Part 7: What does this mean for tenants?

Cook Eviction Stats Part 7: What does this mean for tenants?

I’ve spent the past 6 sections of this study focusing mostly on what the Cook County/Chicago eviction statistics mean for landlords. It’s time to focus a little on what they mean for renters. I’m not a lawyer, and I’m not going to tell you how to win your eviction case. There are far better resources than me out there for saving your bacon. This article is focusing on the numbers.

A lot of you have been involved in eviction cases.

7 out of every 100 apartments in Chicago will be the subjects of eviction cases each year. Given that apartments often house more than one person, this means if you’re a renter in Chicago, you’ve got quite a bit more than a 7% chance of winding up involved in an eviction suit. 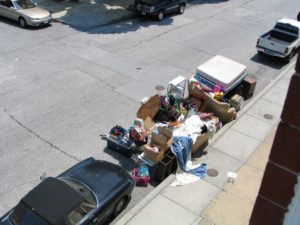 This is what we’re talking about here. It’s undignified, it’s obvious, and it’s humiliating. And a lot of you have been through it before.

By comparison, 8% of married Illinois residents wind up in divorce each year, according to the census bureau.[1]US Census Bureau: [Marital Events of Americans: 2009](http://www.census.gov/prod/2011pubs/acs-13.pdf) You probably know several people who have gotten divorced last year. This means that you may well know even more people who’ve been involved in an eviction case, although they’re probably not going to admit it to your face.

It costs a landlord quite a bit of time and money to file an eviction case. They’re not usually going to do it if a tenant hasn’t given them good reason to do so, and they’ve exhausted every other possible means of solving the problem. Eviction means they wind up with a vacancy on their hands, and usually one in worse condition than one where a tenant moves out of their own free will. However, if they’re gaining no income from a deadbeat tenant, it eventually becomes more cost effective for them to incur a short term vacancy.

There are a few basic things that a human being needs to survive. Food, water, air and shelter are the big ones. If you’re not earning enough money to remain in your apartment, there are plenty of steps you can take to get out of your lease before the court has to mandate that you do so. If a renter has allowed their shelter-related problems to spiral downward to the point of eviction, what does that say about their ability to prioritize?

This exists. It was mentioned in the New York Times. What is this I don’t even….

Chances are good that you will get involved in partnerships with strangers at some point in the near future. It may be a business relationship, a roommate situation, or a dating scenario. Cook County makes it relatively easy for you to check if a person has been evicted before. Perhaps you should take a few minutes to for fact checking before you saddle yourself with a scrub.

You have slightly less than 40% chance of not getting evicted.

62.7% of filed eviction cases in Cook County wind up with the landlord getting the tenant thrown out of the apartment, with many of those cases tacking on an order to pay the back rent. It’s easy when looking at that percentage to envision the other 37.3% of cases involving renters proudly facing their landlords in court, delivering the smackdown of righteousness, and maybe getting their landlords slapped with fines for daring to drag everybody down to the 1st District courthouse. 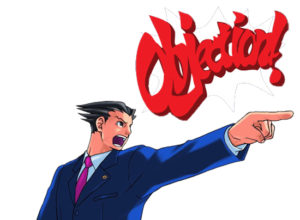 This is not a picture of you in eviction court. Sorry.

However, those other cases could have had any of the following, less exciting conclusions:

Half of those causes are clerical errors, and will probably wind up in a re-filing of the same case at a later date. As for the other half? Well, the point of filing an eviction case is to get a tenant out of an apartment before the lease ends, and sometimes to force them to pay back rent. If those goals are accomplished in any other way, then the case doesn’t need to go all the way to its conclusion. I’d say less than 10% of the tenants who are taken to eviction court wind up “winning” their case at the point that they’re standing in front of the judge.

Even if you win your case, there are repercussions.

There’s been a recent trend with the weak economy where people just stop paying their rent or mortgage and wait for the axe to fall. Renters who are reading this series may be doing so with an eye towards this kind of strategic delinquency, hoping that the eviction proceedings will take long enough that things will turn around for them before the sheriff comes to call. Here’s the thing: your credit will recover in time from everything else you can do to it, but an eviction filing will follow you forever regardless of the verdict.

In all of this analysis, I’ve not really addressed one glaring issue: the fact that I could pull eviction statistics going back to 2004. In fact, if you visit the website of the Cook County Clerk of Court, you’ll find that you can search through online case records going back to at least 1991. In other words, some of those records are old enough to drink.

In order to find out about a low credit score, someone would need your permission and a lot of your personal data to pull your credit report. By contrast, if the state of public records access remains consistent, anyone and their brother can dig up that information without you knowing. That includes future potential roommates, landlords, business partners and employers. Yes, it’s possible for a researcher to see that your case was dismissed. But that’s because it’s possible for them to casually breeze through all of the details of your case.

Now, some of you will react to this with outrage at the courts for making the data public. However, the public records are available because the courts are paid for by the taxpayers, and we have a right to know how our money is being spent. If you want to avoid having the details of your eviction lawsuit made public, don’t get involved with one in the first place.

Friday we’ll be talking a little bit about lawyers, juries and their role in the eviction process. See you then.