Home » All Entries » Cook County’s early 2nd installment property tax bills: What does it mean for you? 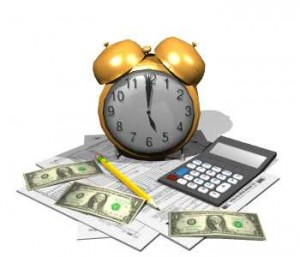 Cook County boards take so long to make up their mind that the first installment is just based on a flat percentage of the taxes from two years prior, and the actual necessary amounts to run the country are determined and assessed in the 2nd installment. So basically, even though we're paying a year behind, they still need at least half the year to figure out exactly how much money everyone gets.

Of course, agreement between all the state and county boards does not happen that often. In past decades the assorted boards have despised each other so thoroughly that the determination of amounts needed has been delayed for months, pushing back the due date of the 2nd installment of property taxes accordingly. 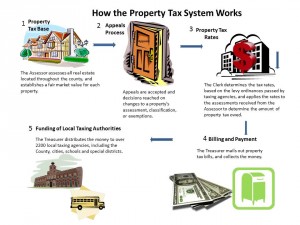 "How the Tax System Works" courtesy of cookcountypropertyinfo.com. Click for full size.

Normally the 1st installment payment is due on March 1 each year and the county has been pretty good about making that happen, as they're billing based on a flat percentage. The 2nd installment is supposed to happen about half a year later, or around August. This has not been happening for decades. The Sun-Times has a great chart of when the 2nd installment has been due going back to 1978. They haven't managed a due date of even September 1 since 2006, and a due date of early August hasn't occurred since 1989.

When 4 Months Late Becomes the Norm

Some major problems have come up based on the late bills. First of all, that money is needed by assorted county and city agencies in order to remain in operation. For decades now the county's been saying "you'll have your money August 1" and then keeping their assorted departments in a holding pattern for a quarter of a year until the taxes start to roll in.

Graph of how property taxes have been distributed over the past couple of decades. Courtesy of CivicFed.org

Without the cash in hand, these agencies - including the county schools, city parks, libraries, museums, forest preserves, first responders, healthcare providers, water management facilities, and the list goes on - have had to apply for expensive short-term loans on the private market to cover the gap. Basically they've had to take out payday loans without knowing exactly when payday would come. Needless to say these agencies are thrilled that they won't have to do so this year.

Meanwhile, when late becomes the norm, others start to plan their schedules around late. Homeowners and the professionals who serve them in tax matters - Realtors, attorneys, title companies, escrow companies and the like - have mostly come to assume that the bills will be late and have begun to plan accordingly.

A scar is going to itch as it heals.

Our boards here in Cook County mostly like each other this year. This means that they've been able to bring us whole new levels of transparency when it comes to data - see my favorite site, Cook County Property Info, for an example. The boards have become more user-friendly, see for example Toni Preckwinkle's simulated "Try to balance the budget" app over on her blog. However, it also means that they were able to determine the amounts needed to calculate the 2nd installment earlier than ever before. Making the trains run on time may have worked well for certain notorious historical European politicians, but making the tax bills show up on time is not inspiring the same kind of love.

They've fixed things pretty quickly since the latest board leaders were elected. However, undoing decades of late tax bills is not necessarily something that should have been done all at once. It's had a kind of "ripping off the band-aid" effect, certainly, but I'm not sure if it hasn't caused a whole lot of stress on the property owners of Cook County for no particular reason. After all, there's no telling if the boards won't all fall apart again in a few years when one of our fearless leaders leaves office for one reason or another.

What does this mean for the average Chicago property owner?

If you bought a home between March 1 and June 30, 2012 and are paying your taxes via bank escrow, you probably have not escrowed enough to cover your taxes for the 2nd half of the year. Make sure you check your tax bill (you can look it up at the county property info site I linked above) and make sure to either a) bulk up your escrow account with this month's mortgage payment or b) be prepared to pay off the shortfall over the next several months.

If you're a buyer or seller under contract and were expecting to close between now and November, chances are there is a clause in your contract requiring the seller to grant the buyer a credit for 2011 and 2012 taxes at closing for 105% or more of the 2010 taxes. This estimation is no longer necessary, as the 2011 taxes are out and the 1st installment of the 2012 taxes will be based on a flat rate calculation. You need to talk to your attorney about any possible adjustments to this clause.

If you're an established homeowner or property owner who pays property tax by escrow, your bank will pay the tax on time out of your escrow account. However, the bank would have been planning on a due date of late autumn, not mid-summer, and would have been billing you accordingly in nice little chunks. You will not have had enough time to build up the full amount of the 2nd installment just yet, so you will probably wind up with an empty escrow account very soon. My advice here is much the same as I gave to the recent home buyers. Pay enough extra with your mortgage this month to offset the difference, or be ready to pay off the shortfall either in a lump sum or in installments over the next few months.

If you pays the County Treasurer directly instead of by escrow you're going to have to make a big payment really early this year. 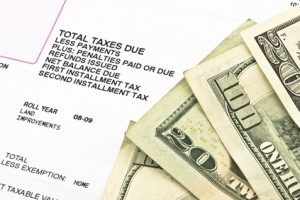 Foreclosures aren't actually the cheapest properties on the market. At the Annual Tax Sale you could snag a building for just the the tax balance due.

If you are an investor or a taxpayer who has not yet paid 2010 property taxes, you need to be aware that the annual tax sale of delinquent properties is early this year. It normally occurs shortly after the 2nd installment due date, and true to form it's happening August 3-10 this year. The annual tax sale is a great way for qualified investors to pick up properties for only the balance due on the property tax. However, for those who are still trying to scrounge up the cash to pay for last year's bills, it means you're going to run out of time far sooner than you probably had expected.

What if you wait until November like usual to pay the bill?

The penalty for late payments is 1.5% per month. That's the equivalent of a credit card balance with a 19.56% APR, which is just about comparable to any other credit card out there. However, unlike credit cards, after a year the county will sell off your property for the balance due on your taxes, so if you make lump sum payments I wouldn't recommend waiting too long.

Did I skip your scenario? Have questions? Let me know!