Home » All Entries » Cook County Evictions Part 2: Yes, Virginia, there is a bias.

Should the tenants start complaining about a biased system now? Should we shout from the hilltops that the landlords have the upper hand and use this data to encourage a new generation of landlords to buy into the Chicago multifamily market? Not so fast.

Last time around I was able to parse the data to see which landlords had lawyers helping them out. I was able to ignore the condo association evictions and see the results of what happened when a case was not found in favor of the landlord. I can't do that with these numbers. It's all mashed in together. I also can't tell whether the numbers are getting better or worse over time, since they didn't give me year by year results, only a big lump sum of all 8 years together. For all we know, the balance could be tilting in favor the tenant at an exponential rate, but we just can't tell based on the evidence at hand.

However, there's enough other factors going on both sides that I think any margin of error is largely negated, especially at this scale.

There are factors that could make a case more likely to go in favor of the landlord. Do they have a good lawyer? Did they show up when the tenant didn't? Do they have a solid relationship with the judge after trying eviction after eviction over a long history of landlording?

There's also the issue that not every case lost by the landlord means that the tenant got to stay. Some cases are dismissed before they get to court for any number of reasons. The tenant may surrender their property voluntarily - that would be a win for the landlord even if it doesn't show in the numbers. The tenant's lease might expire before the eviction makes it to the stand. 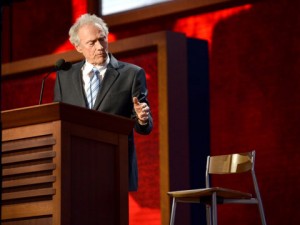 Or the tenant might not show up, for court, as Clint Eastwood demonstrates in his spot-on parody of some days in Cook County eviction court. (image via the Guardian.)

All told, all of these procedural factors cancel each other out. Anyone can win or lose a case based on administrative details. The point is that in spite of all of the challenges and hassles involved, a landlord will win two out of three times.

So what does this mean for the unhappy landlord?

If you're a landlord, it means that every time you file a case you have a two out of three chance of winning. Now, it isn't cumulative. Don't apply the gambler's fallacy to eviction court. If you lose one case it doesn't mean you'll win the next two automatically. Pure luck is not involved.

Remember, you're not out to win a court case. If you're at the point of evicting someone, you want possession of the unit and payment of the back rent, by any legal means. If that happens through the court system, great. If you work something out that satisfies both sides before then, even better.

However, you can rest comfortably knowing that if you do your homework, have a good lawyer and show up to court, you will have pretty good odds of getting that order for possession and quite possibly a money judgment to go with it.

And what does it mean for the renters?

Now, tenants, this doesn't mean that you have to throw your hands in the air and walk away. Remember that there is a whole other side to the courts and landlord-tenant matters that we aren't even looking at. This only counts the times where landlords sue tenants. There are plenty of instances where it happens the other way around, and when it comes to tenants suing for breach of the Chicago landlord-tenant ordinance the landlords are going to come away hurting pretty badly. 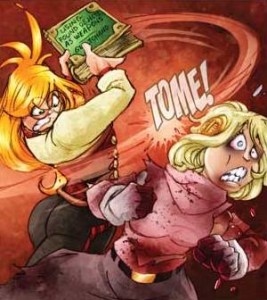 Books and ordinances can be formidable weapons, as Agatha from Girl Genius shows in this spot-on parody of a Tenant Vs. Landlord lawsuit. (Girl Genius is a webcomic by Phil and Kaja Foglio. Go check it out, it's awesome.)

Constructive eviction - which is what they call it when the tenant sues the landlord to get out of a bad lease - is not as common as normal eviction. However, the minimum penalty is one to two times the security deposit for even minor infractions on the landlord's part, and code-based cases tend to create additional fines for code violations on the way to the courthouse. Not to mention that tenants can file class action suits against particularly bad landlords, which is something that would hardly ever happen the other way around.

The justice system does tilt in favor of the plaintiff, as in most cases the defendant is forced to prove a negative. This is traditionally a difficult task. We will discuss this aspect of the situation in more detail on Friday. However, the courts do tend to find more in favor of the defendant if a jury gets involved. 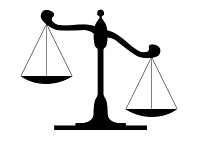 Unfortunately, the scales of justice are rarely in perfect balance, as this piece of clip art demonstrates in a spot-on parody of... oh never mind.

So tenants, if you have anything to take away from this, it's to remember that you've got an uphill battle ahead if you're headed to eviction court. If you feel you are being unjustly prosecuted you really do need to get an attorney and you should ask for a jury trial. Now, if you simply haven't paid your rent for half a year don't waste the time of your fellow citizens who will have to spend their jury duty on your case instead of something valid. But if you've got a valid case, such as a noisy neighbor driving you out of your apartment three nights a week, then know the odds, know your rights and assemble a good set of evidence so you can beat those 1 in 3 odds.

In part 3 we'll be looking at how the 62.8% odds of landlord victory stack up against other types of court cases you might experience, like felony cases, foreclosures and traffic court. Could it be that 62.8% is actually a low percentage for plaintiff wins? Come on back on Friday and find out!