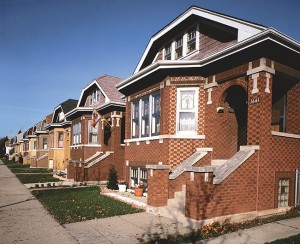 Of course, the number of two-flats on the market is much lower than the number of single family homes. This means that the numbers are far more susceptible to slight fluctuations in price. The scarcity in some neighborhoods that I'd wanted to include, like Hyde Park and Edgewater, led me to rule them out of today's survey altogether as the numbers were just too unreliable.

Also, as much as I love working with first time buyers, these deals are not necessarily right for them. It takes a certain personality type to be willing to take on the responsibility of being a landlord within your own home. A first time homeowner has a learning curve to cover on their own without taking on custodianship of anyone else's living space.

Additionally, one must acknowledge that the current Chicago stock of two-flats is approaching a century old, so unless you love vintage style or are willing to do a lot of upgrades you are not going to be moving right into a home of the same quality that you might find in a new house. (On the other hand, the average bungalow in some of these areas is of comparable age and style.)

As a sidenote, part of me wonders if Chicago wouldn't benefit from a spate of two-flat apartment development. We desperately need more low-to-mid range apartment housing that isn't extremely dated, and I think a lot of the reformed homeowners would fit very nicely as renters in newer two-flats. Most of the multi-unit Chicago has seen over the past decade has been in either in the condo sector or in large-scale high rise luxury rental developments. The primary age group of two-flat owners that I've met are over the age of 50 despite the approachable pricing. I think some newer two-flat stock might entice some younger landlords to take up the trade without going all the way over to corporate REIT-style landlording or massive investment portfolios.

If you're a developer interested in following up on this idea, please contact me. I'd love to chat with you.

Skylarking aside, here's the stats.