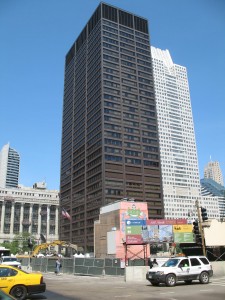 So those are some pretty impressive numbers, but let's look at the story of a couple of individual days. I've chosen the first days of February, March and April 2012 as decent snapshots.

I wanted to focus on Chicago here so I used only the numbers from the First Municipal Circuit Court of Cook County, located at the Daley Center in downtown Chicago. While Cook County landlords may file their suits in any county courthouse (and many Chicago landlords will prosecute in Skokie to avoid the crowds), most landlords will file at the closest available courthouse.

I determined that the case numbers for evictions at this courthouse usually take the format YEAR-M1-7#####, where the 5 digits at the end are assigned in numerical order starting from zero each year. So, the first case in 2012 would be 2012-M1-700000. I used this info plus a Firefox plugin called "URL Flipper" to isolate the first and last case filed on each day, and then page through the cases one by one.

For both days I've looked only at cases involving financial amounts. The zero-balance cases are generally either behavioral disputes or foreclosures. I have also ignored any case where the Plaintiff was obviously a condominium association, as association evictions are not quite the same thing as landlord-tenant evictions. For the sake of nice clean statistics I wanted to keep things focused on cases brought before the court due to unpaid rent only.

In counting outcomes, I have deemed it a successful eviction if possession was granted, regardless of if the tenant was required to pay back rent as part of the judgment.

While I cannot guarantee these stats are 100% accurate, they're as close as I can get them.

Overall based on the eviction data it looks like landlords have about a 50% chance of successfully evicting their tenants, and that most cases will complete in about 2 months. This does not seem outrageously biased to me although the timeframes are long. However, I focused only on whether the landlord got possession of the apartment. In the majority of these cases there was no monetary award. Yes, landlords, you will get your apartment back about half the time, but the unpaid rent is probably not coming your way. The courts undoubtedly think themselves unbiased, but when you have to settle for half a win over and over again it does start to feel pretty unfair.

These numbers were pretty labor-intensive to obtain. I still have them, though, and am happy to extract more data from them if you would like.

Note: This is Part I of a series on Chicago's landlord-tenant biases. Check out Chicago Real Estate Stats: Cook County Evictions Part II to find out how many of these cases also see a judgment issued for back rent payment.