Home » All Entries » Breaking a Lease in Chicago 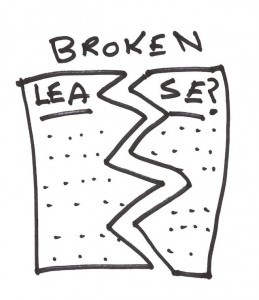 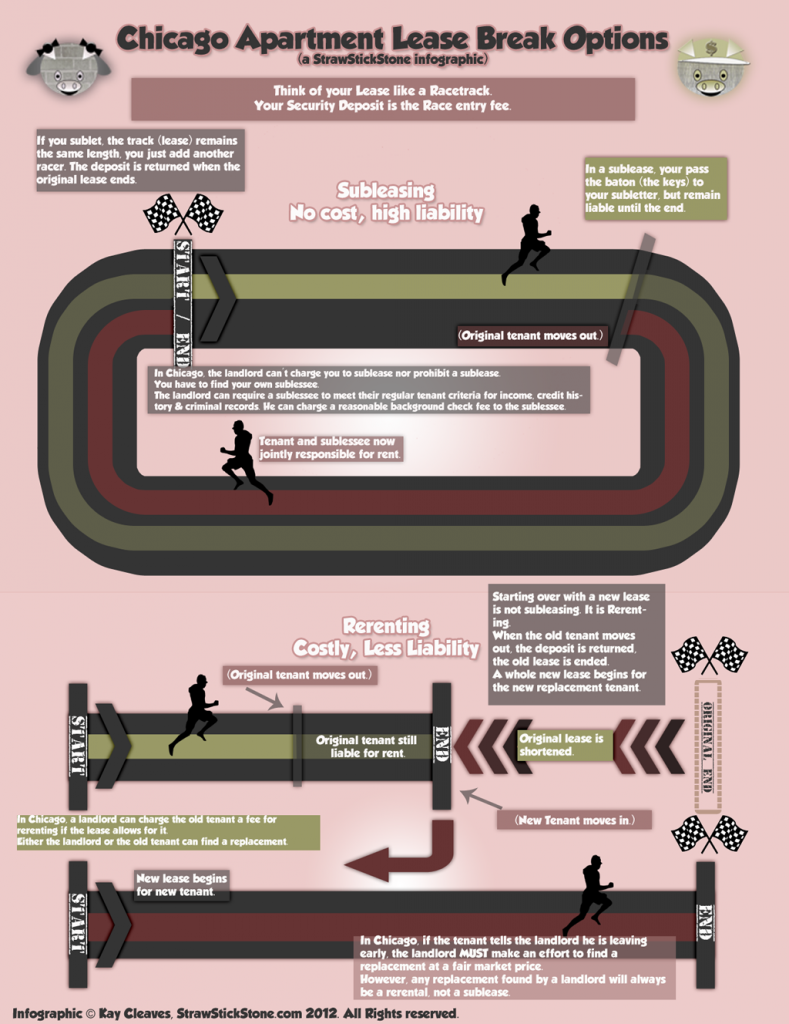 So there's really five options, but the two that I outlined in the graphic are most common and easily confused.

Once the original lease ends, the replacement (sublessee) can sign a new lease with the landlord directly. The original tenant can get their deposit back and the apartment can get turned over, cleaned and painted as if a new tenant were moving in.

2. Rerental.  A lot of tenants don't like being liable for the behavior of strangers. They want to end their lease early and have the replacement start a brand new lease. That's fine and dandy, but it isn't a sublease. As soon as you're out of the realm of subleasing, the protection of the CRLTO mandate no longer applies and the landlord can charge the original tenant for the privilege of an early lease termination.

Just like getting out of any other contract, there is a cost. Generally the amount that a landlord will charge for rerental will be outlined in the lease. If not, the landlord may still be able to deduct actual costs incurred, such as agency commissions, from the original tenant's security deposit provided they can show receipts.

It should also be noted that the landlord is required by the CRLTO to start looking for a replacement as soon as the old tenant says they're leaving.

In both of the cases above, the outbound tenant remains liable for rent until the day someone else starts paying it instead. These two options are favored because they pretty fairly divide the responsibility and liability amongst the parties involved. However, some tenants don't like the idea of having to pay for months and months of rent after they've left while the landlord tries to find a replacement. That leads us to the two less fairly-balanced options.

If the landlord is convinced that they can find a new tenant before they wind up in the red, they can offer the outgoing tenant the option of paying a higher fee to totally terminate their lease immediately, with no ongoing liability.

4. Cut and Run.  The prior three options were all viable for responsible tenants. Of course, this fourth one is also always on the table too, and hovers in the background of every series of lease break negotiations. I should also mention that for newbie tenants and landlords this is often the expected exit method. Tenants assume that the cost of a broken lease will be their security deposit, and surmise that the landlord will notice that they're gone when the rent goes unpaid for a couple of months.

Of course, tenants who engage in such behavior risk the landlord taking them to collections, or obtaining a judgment for unpaid rent which will follow them around on their credit report for years. Cutting and running without notice is totally unfair to the landlord. However, the landlord must remember that while they can theoretically sue for lost income, there is a fine line between collections (legal) and retaliation (illegal), and the courts are quite aware of the difference.

Landlords would do well to remember that no matter how forthright and proper an outgoing tenant is about her intent to leave early, if you drag on the negotiations or the rerental process for too long, this will become the outbound tenant's preferred choice. Your cash flow is not their problem. If you want your apartment to remain occupied you need to stay in communication with your tenant, remain aware of their plans, clearly communicate your lease break policies, and work efficiently to find a new tenant if they give notice of an early departure.

Oh yes, and there's one more method that involves a lot of dirty pool, but as I do promise the unvarnished truth here at StrawStickStone, I'm including it for good measure.

5. Invoke the Tenants' Union. Full disclosure here: I offered to volunteer as a staffer on the hotline for one of the Chicago-area Tenants' Unions and they refused my assistance. According to their volunteer coordinator, since I was unable to unequivocally state that I could endorse the tenant's side of a dispute in every situation regardless of what the law stated, I was a poor fit for their business model.

Chicago has at least two organizations who claim to represent renters and call themselves "tenants' unions." They offer a myriad of dispute-resolution services. They also offer to assist tenants with breaking their leases when the landlord is likely to retaliate. There are provisions in the law for tenants to terminate their lease when their property is in bad shape or the landlord is doing illegal things. It's called "constructive eviction" and a tenant can do it themselves without the unions' assistance. The union just makes it easier.

For a few hundred dollars, the union will send a pack of letters to the offending landlord on behalf of the tenant. These letters accuse the landlord of breaking a large number of laws in hopes that at least one of the accusations is true. Included are such gems as:

If the landlord chooses to push back against the tenants' union, the next stage is the courthouse. Landlords are welcome to fight these letters. I personally wish that more of them would. However, it's annoying and expensive to do so, and given the state of the courts in Cook County when it comes to landlord-tenant matters your chances of winning are slim. The accusations run on for pages. Chances are at least one of them will be true, and if so, you've lost your case.

There are certainly bad apartments and bad landlords who endanger their tenants. I do not begrudge tenants the right to get out of a dangerous situation. Constructive evictions are a very necessary part of landlord-tenant law. What I do not like is the current practice of using these letters as a "get out of jail free" card: tenants will use them against any landlord regardless of circumstance. And I definitely do not like the unions' strategy from a few years back of contacting tenants who are listing their apartments for sublease on Craigslist and offering these letters as an alternative.

So what have we learned today?

Broken leases are an unavoidable aspect of being in the apartment business. They're one of the things that make renting attractive to tenants, no matter how much they damage the landlord's bottom line. In my opinion it's better for the landlord to focus your energy on controlling the variables that are within reach, rather than wasting stress on the ones that you can't affect. Rather than bringing anger back to the tenant, learn to take it in stride. Expect broken leases, work them into your risk profile, and know how to handle them efficiently when they occur.

Both sides have many choices available to them when it comes to breaking the promise of a long-term occupancy. Both can avoid all of this by going month-to-month exclusively, but as that heightens the chances of a wintertime vacancy and eliminates the protection of a written lease, it's a devil's bargain. I'd personally rather have the written lease and know that over half of the tenant population will honor it, another good chunk will at least try to do so, and plan accordingly for the scant handful of irresponsible jerks who leave without notice.

If anyone reading is unclear on the differences between subleasing and rerenting, let me know in the comments. Otherwise please share with anyone you know who might need some help understanding their options.